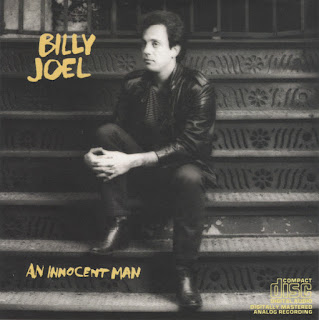 An Innocent Man is one of Billy Joel's greatest artistic triumphs even though its songs will never be considered high art. Instead, Joel closed out his classic period with a more relaxed album that is mostly a tribute to pre-Beatles pop and 60s rock. After this, the Long Island native's records continued to sell but he never again reached the heights he achieved with this set of music.

Joel spent a lot of time in the studio with his impeccably and intricately produced predecessor, The Nylon Curtain. He said working on it wore him down so, for his next record the singer took the laid-back approach. He didn't under-produce An Innocent Man but he didn't try to turn it into another Sgt. Pepper's Lonely Hearts Club Band either. Instead, it's the piano man's version of The Beatles' eponymous 1968 set (a.k.a. the White Album). In other words, it's a stripped down gem.

An Innocent Man opens with "Easy Money" an obvious tribute to Stax/Volt. "Uptown Girl," (#3 on Billboard's Hot 100 singles chart) is for Joel's lady at the time, Christie Brinkley, and it's also a perfect tribute to The Four Seasons. Joel and his versatile band prove they can even turn in a good doo-wop performance with "The Longest Time" (#14), and the title track, his salute to The Drifters, went to #10. "Tell Her About It" (#1) is his homage to Motown. Lyrically, "Keeping The Faith" is for people who appreciate pre-British Invasion rock. It climbed to #18. "Leave A Tender Moment Alone" celebrates the music of Smokey Robinson and stopped at #27.

On "This Night," Joel shares a writing credit with a musician of note, Ludwig Von Beethoven, a song on which the rocker adapted the classical composer's work and turned in a very fine ballad.

This wonderful set of heterogeneous rock styles and his earlier, more personal work on Turnstiles (1976) are the best things Joel ever did in the studio.

An Innocent Man remained on Billboard's top album chart for over two years and Joel's only album to surpass that mark was The Stranger.

An Innocent Man was nominated for an Album of the Year Grammy but lost to Michael Jackson's Thriller.