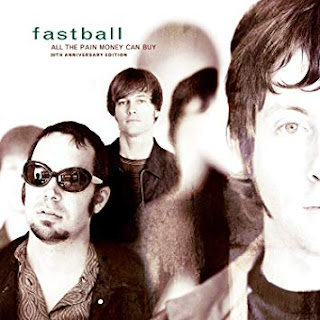 All during the nineties new rock bands were sprouting up like dandelions in early Spring and Fastball, an Austin, TX trio influenced more by power-pop than the raging grunge scene, was among them.

Unusually, all of the group's original members are still in the lineup more than a generation after they organized. Guitarist/vocalist Miles Zuniga and bassist/vocalist Tony Scalzo are still teamed up with drummer Joe Shuffield. Zuniga and Scalzo are the primary songwriters.

All The Pain Money Can Buy, the band's second album hit pay dirt as they wrote concise, modern, pop-rock with a 70s aesthetic that could make you smile even while it possessed enough of a 90s edge to avoid being labeled as throwbacks.

A song doesn't get stuck in your head any easier than Scalzo's "The Way." Radio loved it, and the medium propelled it to #4 on the American Mainstream Top 40 chart and #1 in Canada. Zuniga's "Fire Escape," their second single off the album, didn't do as well but "Out Of My Head," also from the pen of Scalzo, went to #20 on the Hot 100. All three tunes are easy to listen to without being labeled "easy listening" and with titles such as "Charlie, The Methadone Man," "Damaged Goods," and "Nowhere Road" they also avoid lyrical triteness.

The rockers also expanded the boundaries of what a trio can do. On "G.O.D. (Good Old Days)" they added a horn section that beat many of the famous horn bands in the business at their own game.

Fastball released their eighth album, The Help Machine, this past October. It was produced by Steve Berlin of Los Lobos proving that the still relatively unknown band has enough cachet to attract an in demand producer.