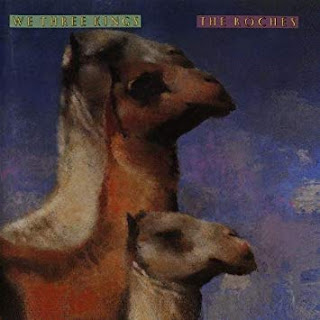 In 1990 The Roches issued We Three Kings, a most intriquing and entertaining Christmas album that is unique in every way. It clocks in at over 58 minutes and contains twenty-four songs.

The sisters from New York City who sing effortless harmonies on this album are, as usual, distinctly offbeat and to many an acquired taste. The trio is completely different from nearly everyone who ever sang into a microphone for a living, yet their work is mostly rewarding. The same is true on this Christmas CD.

Terre Roche's "Star of Wonder," is one of two originals. It's also one of several acapella tracks offered here.

Other highlights include a sunny and straightforward version of "Sleigh Ride," another acapella arrangement, and one of my personal seasonal favorites, "The Holly and The Ivy."

The long set list is quite varied. The group includes a lot of seasonal pop classics but they're not afraid to embrace a significant number of traditional carols, mostly sung with the reverence that people who love these very old songs believe they deserve.

The Roches' exaggerated and very annoying Brooklyn accents on "Frosty the Snowman" and "Winter Wonderland," disrupt the flow of an otherwise fine record.

Appreciating The Roches may not be easy for many people but if you're looking for something a little different this year you may want to give We Three Kings an intense listen. You may be pleasantly surprised at what you'll find on this out-of-the-mainstream effort but you have permission to skip the Brooklynese.