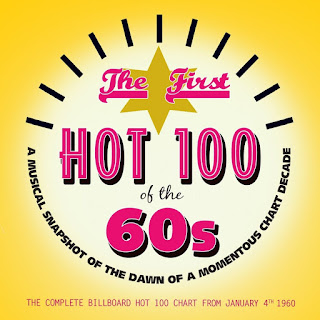 It was only a couple of years earlier, in August 1958, when the first Hot 100 was published and in just two years it became the ultimate guide to the US singles market. At the time of this chart Billboard determined a song's popularity based on sales of 45 RPM singles and radio airplay.

Today, a song's ranking in the United States is based on the total sales of both physical and digital formats, radio airplay, and online streaming. So, it's possible that if the current methods were used in 1960 the chart may have had a very different look. We'll never know.

Hot 100s always included many genres and they usually contain some classic tracks along with a lot of simple-minded dreck. The January '60 chart is loaded with one hit wonders and novelty songs but it was also home to a lot of famous artists and songs that would eventually become standards.

As the new decade dawned the initial wave of rock 'n roll had died out and we were still four years away from The Beatles saving popular music. The top hits of the day were not the sounds people think of when you hear the term "60s music." That moniker is normally used to describe the period that began in February 1964 when the Liverpool quartet clobbered America on the head and took over music stores and radio. This era had more in common with Leave It To Beaver than Woodstock.

Respected artists who transcended time had records out too. Among them are Tony Bennett, Ray Charles, and Johnny Cash.

Other major stars of the era who fell off the radar completely when the British Invasion and Motown arrived on the scene are on the list too. Little Anthony and The Imperials, The Drifters, Dion and the Belmonts, Connie Francis, Bill Haley & The Comets, Ricky Nelson, and Tommy Edwards all make appearances.

Number 1 this particular week was by country artist Marty Robbins who had recently released one of the genre's early concept albums, Gunfighter Ballads & Trail Songs. The LP is about the old West and features the the big hit "El Paso." The single went to #1 on the country chart for seven weeks and crossed over to the pop side where it captured the top spot on the Hot 100 too.

In at #12 was Bobby Darin whose only #1 hit ever was sliding down the charts. "Mack the Knife" has become a timeless classic.

At #18 was "Smokie, Part 2" by Bill Black's Combo. Black was Elvis Presley's bass player at Sun Records and was one of the early adopters of a Fender Precision bass.

Johnny Mathis owned the #40 spot with "Misty." Originally a jazz piano piece written by Erroll Garner, lyricist Johnny Burke added words and it became one of Mathis's signature songs along with "Chances Are." It got as high as #12.

Another notable entry was "Clouds" by The Spacemen at #52. The single was written and produced by a man named Julius Dixson. At one time the track had lyrics and vocals but for reasons unknown these were removed and the record was issued as an instrumental. It was released on Dixson's own label, Alton Records. It was an R&B #1 but it only got as high as #41 on the Hot 100. This long forgotten track is significant for being the first single released by an African-American owned label to claim the top position on ANY American chart, a whole year before Berry Gordy's Motown label accomplished the same feat. How's that for a bit of trivia?

Jimmy Jones laid claim to the original version of "Handy Man," a song most of us first heard when it was covered by James Taylor in the 70s. This week Jones' hit slid down to #67 but earlier it reached #2 on the pop chart and #3 on the R&B side.

There were several songs left over from the Christmas season. Two that are now considered classics are The Chipmunks' novelty tune (#61 this week) and The Harry Simeone Chorale's "Little Drummer Boy," the original recording that made the chart every year from 1958 through 1962. It peaked at #15 for the just ended holiday season and in January 1960 it was still riding high at #22.

A 34 page booklet accompanies the package and it's loaded with details about every song and artist who appears on the list along with pictures of many of the hitmakers.

Overall, while the package includes some good music many of the songs on it are more interesting as historical artifacts than as stuff we would like to sit down and listen to. Of course, your opinion may differ.

You can buy the entire set here.

If you found this post interesting you may want to see the top 10 Billboard hits for the week JFK was assassinated in 1963.

Several videos follow the track listings below to either satiate your curiosity or add to your life's enjoyment.