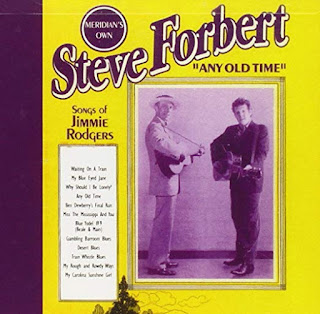 I've always had respect for country music but Ken Burns' sixteen hour documentary provided me with a much greater appreciation of the genre even though I'm not yet fully indoctrinated.

While country's roots grew from the rural South the music appeals to a far more cosmopolitan audience today and its influence has become universal. Respected rock, folk, and R&B musicians often profess their love.

Country's first major star, Jimmie Rodgers, from Meridian, Mississippi, was featured heavily in the early episodes of Burns' epic documentary, and while his influence on the music is incalculable his name and work are virtually unknown today except to musicians and historians. One of these is the veteran rocker and singer-songwriter, Steve Forbert, who covered twelve of Rodger's songs in 2002.

Not coincidentally, Forbert is also from Meridian and, while you can't otherwise compare the two, both are respected songwriters. Forbert's voice is gravelly while Rodgers' is not. The current star's recording sessions are firmly rooted in the 21st century and usually employ a full band, often with electric guitars, while Rodgers had to contend with far more primitive studios and equipment. In the end Forbert sounds just like himself while lovingly resurrecting the late legend's body of work. That's a good thing because most listeners will prefer his modern versions even while acknowledging the fact that Rodgers is an excellent composer.

The album's highlight is its opening track, "Waiting For A Train." You can listen to it below following Rodger's original version.