Fifty Years Ago: Three Days of Peace, Music, And Mud At The Little Aquarian Exposition On Max Yasgur's Farm 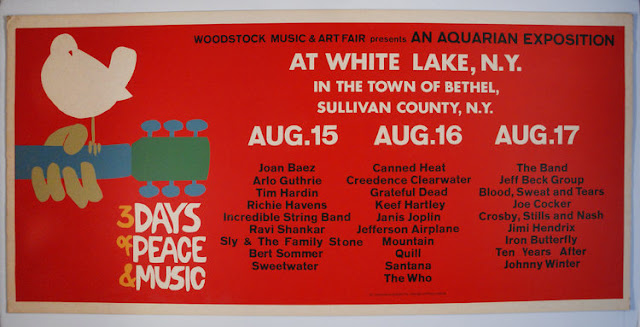 I wasn't at Woodstock but here are my thoughts on the historic festival.

I was only sixteen that summer. I didn't have a car or my driver's license yet, and I had no other means of getting to Max Yasgur's farm in rural Bethel, NY. Nor did I know anyone from my hometown or high school who ventured there for the infamous three day event. Even if I had been able to catch a ride with someone neither one of my usually easy-going parents would have allowed me to go. I don't blame them.

It's fine that I wasn't there. I would have been miserable. I've never been a fan of standing in the rain or wallowing in mud, not bathing, going without adequate bathroom facilities, a lack of food, smoking mind altering plants or ingesting harmful chemicals. I was too straight for Woodstock but I was deeply fascinated by the whole 60s counterculture movement as a sideline spectator. A lot of it had to do with the music.

I've always preferred more intimate settings for live performance. When I go see bands play it doesn't have to be at a small club, but to this day I don't enjoy large, overcrowded, baseball stadium concerts where you can't see the performer except on a large video screen with the volume turned up so loud that all of the instruments bleed together into one huge blur of sound.

Many of the top bands of the day took the stage at the mid-August, 1969 event including Creedence Clearwater Revival, Jefferson Airplane, Sly & The Family Stone, Santana, The Grateful Dead, Janis Joplin, Jimi Hendrix, and many more. Much of the music was terrific.

My favorite probably would have been Crosby, Stills, Nash and Young, whose beautiful harmonies and songs continue to thrill me in the 21st century. The sounds CSN&Y made were quite sophisticated for pop music. Just listen to "Suite: Judy Blues" and you'll understand. The quartet isn't quite as good here as they were at later shows because Woodstock was only their second gig together.

Below is a lesser known version of the song "Woodstock" and CSN&Y's complete performance.