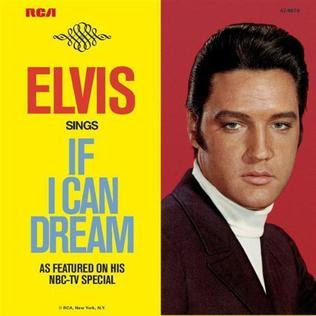 Despite its melodrama Elvis Presley's 1968 hit single, "If I Can Dream," is one of his finer performances and has always been a particular favorite of mine.

It was written especially for The King by Walter Earl Brown two months after the Martin Luther King assassination and the connection between the song and MLK should be obvious. The song's world debut was as the finale to Presley's '68 Comeback Special, a show that completely revitalized his career.

His obsessively controlling manager, Col. Tom Parker, did not want Presley to do the song but he wanted to record it, in part because he was sick of Parker (who wasn't really a colonel) telling him what to do. Presley had become embarrassed by the crappy movies he was making and the songs that went with them and he wanted to do something more substantial with his career.

"If I Can Dream" introduced us to the "new" Elvis, the one who recorded mature pop music that was in tune with the rapidly changing late 60s. It began the era that included "Suspicious Minds," "In The Ghetto," "Kentucky Rain," and more.

The record was on the Billboard Hot 100 for thirteen weeks, peaked at #12, and earned a gold record.