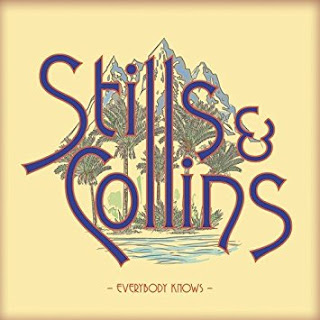 I've only recently become aware that people have been clamoring a long time for Stephen Stills and Judy Collins to work together. That time finally arrived late last year with their album, Everybody Knows. Now that it's happened I can say that, at least professionally, Judy Blue Eyes and Crosby, Stills, Nash & Young's best all around musician are a perfect pair.

Stills' vocals are less gravelly than they have been in recent years and Collins' angelic voice has not withered at all. She sounds exactly as she did in 1968 and when they duet she more than compensates for any aging in her partner's voice.

Song for song there is very little new music on Everybody Knows. The ten track set includes five covers, three Stills compositions and two by Collins. The originals are mostly older songs but it doesn't matter because the end result is quite rewarding.

The ten track album's rockier moments are all courtesy of Stills. The only two obvious rockers are a surprising cover of The Traveling Wilburys' "Handle With Care" that opens the album and one of several new takes of their own songs such as the album closer, "Questions." The latter was taken from Buffalo Springfield's last album and rewritten to become CSN&Y's "Carry On" from Déjà Vu. If it wasn't for Collins' vocals both tracks could pass for Stills' solo work.

Other covers include Tim Hardin's "Reason to Believe," Bob Dylan's "Girl From the North Country" as well as Stills' "So Begins The Task," and "Judy," another song about his good friend and former lover. Collins revived her own "Houses" and Sandy Denny's "Who Knows Where the Time Goes," a song that became a standard for both of them.

The album takes its name from a fine version of Leonard Cohen's well known song.

It may first appear that Stills and Collins took the easy way out by recording mostly decades old songs but the duo sounds great. The album is very pleasant and extremely well put together. It makes one wonder that if the veterans had teamed up earlier, when their creative skills were at their peak, what great work they may have come up with.

If you're assigning stars to Everybody Knows it would get three out of four.