October 04, 2018
This is a re-posting of a review that originally appeared here in 2005. It has been edited slightly. 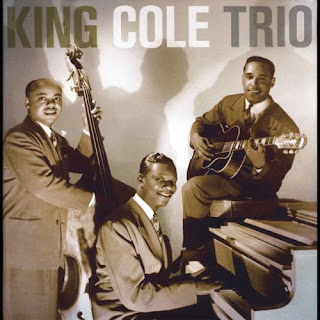 Transcriptions were studio recordings made exclusively for radio broadcast that were never intended to be released to the public via commercial records. Transcriptions began in the 1930's and were used on radio for decades. Even as late as the 60s The Beatles used the transcription process for their British radio show appearances, most of which have since been released on their two double-set Live At The BBC releases in 1994 and 2013.


"In the 1930's, when radio featured live music, the playing of commercially available 78 rpm recordings was frowned upon on the premise that the listener was less likely to go out and buy a record that he or she could hear over the airwaves for free. Many records issued in the 30s and 40s even stated on the label: "not licensed for broadcast".

Still, local stations needed more than network shows and local affairs programming to fill their broadcast day. Out of this vacuum came a number of transcription services that took bands into studios and recorded material that would be edited into 15-minute segments for broadcast purposes only. These sessions were usually a little more informal than phonograph record dates and often boasted a higher level of material because artists were not trying to cut the latest song-pluggers tripe in search of a hit.

Most of the transcription services were independent operations, not part of a label. But RCA started the Thesaurus transcription operation in the late 30s and Capitol got into the act in 1945. When the King Cole Trio's transcription deal with C. P. MacGregor expired, Capitol moved to sign them to its new service (they had been signed to Capitol's regular label since 1943). The results of the relationship, which ran from 1946 to 1950, are contained in this 3-CD set."

Old time jazz fans will love this box of radio transcriptions recorded by Nat King Cole and his jazz trio precisely for the informality and the "higher level of material" that Cuscuna discusses. All that is good about jazz piano shines through on these recordings that weren't commercially available until 2005.

The trio seldom used a percussionist, nor was one needed because Cole, a bassist, and an electric guitarist easily swing through seventy-one blues titles, ballads, straight jazz pieces, and even some novelty tunes. There are several Count Basie covers including "Lester Leaps In" and "One O'Clock Jump," some Cole originals, and a remake of his hit "Route 66." Ballads include an upbeat version of "Dream A Little Dream Of Me." Cole was a very tasteful, melodic, and gently swinging pianist. His voice was as smooth as silk, and his bandmates were up to their tasks as sidemen.

About a year after the last sessions Cole broke up the trio to become the singer most of us remember today. According to the All Music Guide many looked upon his change in direction with the same disdain Bob Dylan received from the folk community when he went electric in the mid-60s. As great as he is on the trio recordings most people only know Cole as the crooner of pop standards such as "Unforgettable," "Mona Lisa," and "The Christmas Song" (perhaps better known as "Chestnuts Roasting On An Open Fire") all sung with a full orchestra loaded with strings.

Nat King Cole died of lung cancer in 1965 at age 45. I have loved him since I was a child and have often wondered what he would have accomplished musically had he lived.
Buried Treasure Jazz Jazz Vocals Nat King Cole