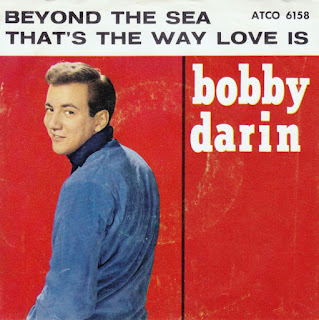 The late Bobby Darin's career and short life ended so many years ago that he is often forgotten today. He died at only age 37 in 1973 of a heart condition he developed during his youth.

Darin was quite a versatile vocalist. He began his career singing light teen pop tunes like "Queen of the Hop," "Dreamlover," and "Splish Splash" before turning to the more adult fare he was born to sing and really loved. Later, he changed directions again, moved away from the jazz vocals of "Mack The Knife" and "Beyond The Sea," and became a folk singer, taking Tim Hardin's "If I Were A Carpenter" to #8 in 1966.

The terrific "Beyond the Sea" was composed in 1945 as a romantic pop tune by American Jack Lawrence. The music came from a French song, "La Mer," ("The Sea" in English) by Charles Trenet who originally wrote the melody and lyrics as a tribute to the sea.

The swing era of Benny Goodman, Tommy Dorsey, and Glenn Miller had passed more than a decade earlier by the time this vibrant love song was released in 1959 but it's a perfect example of the more sophisticated, fuller sounding, big band tracks with vocals of the period, the kind of swing tune Frank Sinatra was known for during his Capitol years. "Sea" was Darin's immediate follow up to "Mack the Knife," but for my money it's better than his more famous, earlier hit because it's more fun.

"Beyond the Sea" peaked at #6 on Billboard's Hot 100 in February 1960 while spending fourteen weeks on the chart.