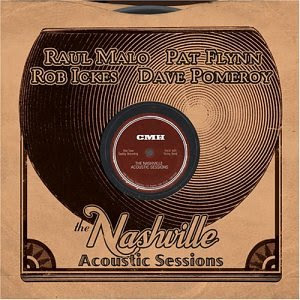 Except for Raul Malo's name appearing first on the cover of The Nashville Acoustic Sessions this excellent, twelve song set tries to convince us Pat Flynn, Rob Ickes, and Dave Pomeroy are his equals. However, as always, whether he's on stage or in the studio, Malo dominates any sessions he participates in.

This is the most bare-boned music Malo has ever released either with The Mavericks or as a solo artist. It is pure unadulterated country with no bombast anywhere. The only thing that prevents this album from sounding as if it was not recorded in the hills of Kentucky is the star's pop-operatic vocals.

Flynn and Ickes, who play mandolin, guitar and dobro, along with bassist Pomeroy, are perfect sidemen for Malo on this almost percussion free affair. All three are masters at what they do.

The material is wide ranging but Malo and friends tailor the songs, almost all from celebrated artists, to fit their needs. The songs are from way back when country was rural. Featured are Jimmie Rodgers, Hank Williams ("Weary Blues from Waitin'") and two selections from the Louvin Brothers. Also included are tunes from 60s and 70s stalwarts such as Gordon Lightfoot ("Early Morning Rain") Gram Parsons ("Hot Burrito #1"), Bob Dylan ("You're Gonna Make Me Lonesome When You Go") and a nice version of Van Morrison's "Bright Side Of The Road." These last two songs show you how good they can be when supported by an excellent vocalist.

The album opens with "Blue Bayou," a perfect choice for Malo because of the many Roy Orbison comparisons that have followed him around for what seems like a century.

An almost schmaltzy version of Henry Mancini's "Moon River" is here too but Malo's good taste stops it from going too far.

The highlight is the Louvin's "Great Atomic Power," a foot-stomping, gospel, protest song that plays off the fears of a possible nuclear holocaust. Originally released in 1962, it's the same year John F. Kennedy stared down Fidel Castro and the Soviet Union during the Cuban Missile Crisis.

There is no original music anywhere but it doesn't matter. It's one of Malo's finer efforts.

You can buy it here.