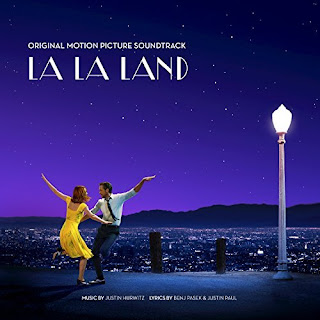 As a movie offering us a good love story La La Land easily satisfies. Actors Emma Stone and Ryan Gosling are excellent and they have a great rapport with each other. They look and act like a real couple, something that is a must for a romantic film to be successful.

This best film nominee of 2016 is well paced and looks great. Both things can be attributed to Damien Chazelle who is quickly establishing himself as a fine director.

Much of the plot of La La Land is driven by Gosling's character who is an aspiring jazz musician and Chazelle is also the man behind the award winning Whiplash, a 2014 film about a jazz drummer at a music conservatory. Apparently, the director is a big jazz fan.

La La Land gets four stars for its acting, plot, direction, cinematography and all of those neat little things Hollywood gives awards for. Unfortunately, the music is not as rewarding.

The jazz, pop, show tunes, and instrumentals, all composed by Justin Hurwitz who also worked with Chazelle on Whiplash, are not compelling and waste the lyrics of Benj Pasek and Justin Paul. Even 'City of Stars," the Academy Award nominated song from the film and, "Another Day of Sunshine," the huge production number that opens the flick on a Los Angeles freeway, failed to make a lasting impression. As soon as the songs were over they disappeared from my mind forever. The lone exception is John Legend's performance of "Start a Fire," a bright, pop-rhythm & blues workout that deserves significant radio airplay.

The soundtrack isn’t helped by the fact that Stone and Gosling are merely adequate vocalists. Their singing is bland and not at all powerful. Musicals need better voices than these two stars possess. In the end there is no need to listen to the soundtrack outside of the context of the film but you should go see it anyway. The story deserves your attention.