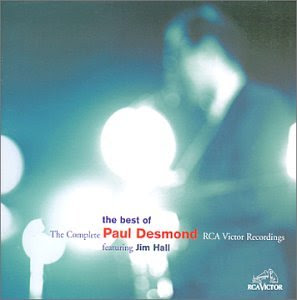 The late saxophonist Paul Desmond rose to fame as part of The Dave Brubeck Quartet. He still has the honor of being the man responsible for the biggest selling jazz single of all time, "Take Five." His hit also appeared as the first track on Brubeck's classic Time Out LP way back in 1959.

Desmond rode shotgun in Brubeck's car (some even say he was the driver) so it's not surprising that he also wanted to make his own records.

According to Doug Ramsey, a highly regarded jazz journalist who wrote the liner notes for both the original five CD box set and the awkwardly titled, ten track sampler culled from it, The Best Of The Complete Paul Desmond RCA Victor Recordings Featuring Jim Hall, Desmond made an agreement with Brubeck that if he recorded on his own it would be without a piano player. Your first thought could be, here is another example of commerce getting in the way of art but the pact turned out to be a blessing in disguise because the agreement allowed Desmond's records to develop their own personality.

Desmond's second soloist on all of his RCA albums during during the first half of the 1960s except for one was Jim Hall, an axeman whose talent was thought to be equal to his leader's. For many of the sessions the alto player also used Brubeck's bassist Eugene Wright as well as Percy Heath and Connie Kay, bassist and drummer for the Modern Jazz Quartet.

Unfortunately, Ramsey also noted that although Hall and Desmond were perfect together in the studio they never played together live, an odd occurence in the jazz world.

A handful of highlights include "My Funny Valentine," one of Chet Baker's signature songs. It employs strings and woodwinds on a baroque-jazz procduction that supports the quartet quite nicely. Despite the orchestral presence there is no sappiness here and the expanded unit enhanced what became an intelligent and melodic mood piece.

"Body and Soul" also features strings but it's more traditional arrangement also manages to avoid all of the pitfalls that could turn the The Great American Songbook standard into elevator music.

"Take Ten" was written as a much requested followup to "Take Five." They're similar in tone and it too has a 5/4 beat. Hall's guitar replaces Brubeck's piano and that's a good thing because otherwise Desmond may have been accused of simply treading water.

The title of "Bossa Antigua," the only other Desmond original on the abridged release, reveals its obvious Brazilian roots and masterful drum work by Kay.

There is more where these tunes came from and, while a large box of Desmond could be a bit much, this CD is a nice set from someone who helped put the "smooth" in jazz before there really was such a thing.