Have you ever been to a house concert? For the uninitiated they are simply concerts hosted by a homeowner on their private property for their family and friends and sometimes the general public. On Saturday night I attended my first such affair.

This rain or shine event was held in the backyard of a typical suburban development home outside Phoenixville, PA on a very pleasant evening. The performance was open to the public and was advertised on the website of Jimmy Lafave, the superb, Austin based, singer-songwriter who was the entertainment for the evening. The $20 per head price included a potluck picnic before the show began. About sixty-five paying guests heard Lafave and his band play for almost two and a half hours.

Lafave played acoustic guitar. He was supported by a new four piece band: a drummer, an electric bass player, an excellent, twenty-four year old, electric lead guitarist, Anthony Da Costa, and an even better harmonica virtuoso, Bob Beach. The group had great onstage rapport with each other and the frequent verbal jousting between the star and Da Costa was especially entertaining.

Saturday was a little different for Lafave. Even though he has an extensive catalog of his own work, the evening was loaded with cover versions. His original tunes took a back seat. The reason for this is not entirely known but perhaps it's because, as Lafave said, this band doesn't know a lot of his songs. Lafave couldn't honor the host's request to play one of his self-penned efforts, "This Land," because they never rehearsed it together so he had to settle for a version of Bob Dylan's "Not Dark Yet" instead. (Settling isn't really the right word, the band's take on it was outstanding.) Dylan's music is ingrained into Lafave's soul and covers of Mr. Zimmerman's songs are always an essential part of Lafave's albums and stage repertoire. 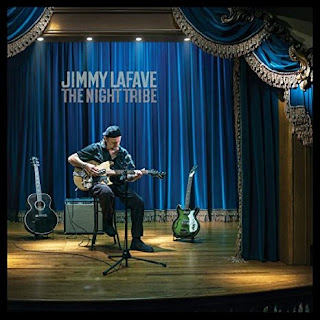 Lafave opened the affair with two songs from the new CD, The Night Tribe, including "The Beauty of You," but then he pretty much left the disc alone except for his cover of "Queen Jane Approximately." He played some of his earlier originals later in the show, but not many.

Other covers included Creedence Clearwater Revival's "Have You Ever Seen the Rain" as a singalong and "These Days," one of Jackson Browne's greatest, as well as a third and final Dylan piece, "Just Like A Woman."

Much of Lafave's own work is very laid back but he and the band can work up a sweat when they want to and they proved it on three pure blues offerings that put both Da Costa and Beach in the spotlight. The harp player easily won over the crowd and he was often the featured soloist throughout the night. He just may be the best harmonica player I've ever heard live and his contributions were very important to the success of the evening.

The only obvious flaw was that Lafave seldom gave us the names of the songs he and the band played. Other than that the evening was almost perfect and the neighbors never complained.

We'll close with a postscript that is mostly for readers who were fans of Philadelphia's wonderful alternative radio scene of the late 60s. Before Lafave took the stage a local legend, disc jockey Michael Tearson, grabbed a mic and spoke to the assembled crowd. He told us that he just left his position with Sirius XM's Deep Tracks because he believed the satellite radio giant was "dumbing down the station." He also promoted his two free online podcasts: Radio That Doesn't Suck and Michael Tearson’s Marconi Experiment on iRadioPhilly. He also sang one song, acapella, from his own folk music CD.