The article below is a revised version of a CD review that was originally posted on this blog over ten years ago, on May 8, 2005. 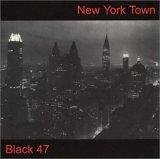 Whether the song concerns romantic relationships, the immigrant experience, people on the dark side of urban life, or the awful events of September 11th that appear to have inspired him, Kirwan composed some wonderfully literate music. As always, he wrote with both humor and sadness and each song makes you feel the emotion he wanted to convey.

In a lot of a ways this CD is typical Black 47 but the concept and an unusual abundance of star-studded musical guests help set this one apart. Rosanne Cash is great here as she shares lead vocals with Kirwan on "Fiona's Song," a story about a lonely, young Irish woman who seeks solace in the bars of Queens. (You can listen to Cash & Kirwan together here.)

Interesting songs are everywhere. "Livin' in America - 11 Years On" has the identical melody and an almost identical arrangement of the same song from the band's first major label CD, Fire of Freedom, but with a whole new set of lyrics that update the lives of the feuding couple we were originally introduced to in 1993.

"Fatima," is a story about immigrants adjusting to life in The United States but this time we hear the tale of a Muslim father not coming to terms with his daughter's Christian boyfriend.

The highlight is "Orphans Of The Storm," a song written as a sequel to Kirwan's "American Wake," a completely different song that appeared on the sextet's 1994 CD Home Of The Brave. In "Wake," Sean, a young Irishman, leaves his native land for America. The sequel finds him living in New York and working at the World Trade Center on September 11th.