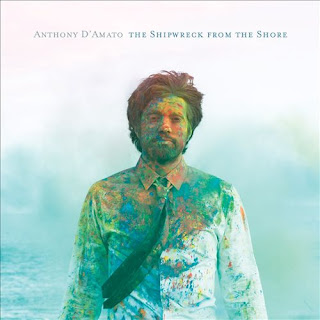 Singer-songwriter and rocker Anthony D'Amato is quite an engaging personality in concert. He's also a good musician and songwriter, two talents you will immediately notice upon listening to the ten songs from his third CD, The Shipwreck From The Shore.

This is D'Amato's first album released with the help of his new label, New West Records, and it contains everything that makes a pop album a pleasurable experience. He serves up clever lyrics filled with hooks while giving us songs that are concise enough to not overstay their welcome.

Shipwreck is quite a surprise, especially when you consider that D'Amato's only previous recording experience was laying down tracks for his first two albums in his dorm room at Princeton University. The ex-Ivy Leaguer kicked these latest sessions up a notch by recruiting members of Bon Iver into his backing band and using Sam Kassirer, Josh Ritter's keyboard player for over a decade and producer of three of Ritter's albums, to run these sessions. The combination makes D'Amato sound as if he's a seasoned veteran.

The young guitarist's lyrics are not cryptic and they're laced with a sense of humor many singer-songwriters lack. The opener, "Was A Time," is proof. The New Jersey native takes a serious subject, like a romantic breakup, and uses a very upbeat riff and melody to lighten the tone, especially when coupled with the song's humorous official video (seen below). The same is true with "Good and Ready," a refreshing and unique take on the tired old topic about a protagonist who just doesn't want to live without waking up next to the love of his life.

Other highlights include "No Not Tonight," "Cold Comfort, and "If It Don't Work Out."

D'Amato has sometimes been compared to Bob Dylan and, as usual, a pronouncement like this one is oversused and almost always unfair. An artist doesn't have to be a rock god to produce satisfying work and D'Amato, as a mere mortal, most certainly does. Perhaps this comparison was born of the news that he studied songwriting at Princeton with Pulitzer Prize winning poet Paul Muldoon.

At times D'Amato comes across as a folkie performing at a coffeehouse and other times he is a middle-of-the-road rocker with a pleasing edge. Either way he's a winning newcomer.