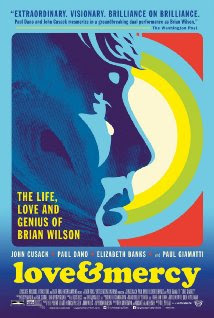 Love & Mercy is indeed a very good movie and based on what I've read about about both Brian Wilson and The Beach Boys (which is a lot) what we see on the screen is very accurate. It's also extremely well acted and directed, a definite thumbs up as Siskel and Ebert would have said. Praise for the film has been nearly unanimous.

I agree with most observers that Paul Dano was better than John Cusack at playing Wilson, Elizabeth Banks as his future wife (Melinda Ledbetter) was drop dead gorgeous, and Paul Giamatti was perfectly evil as Dr. Eugene Landy.

The movie has been discussed endlessly in the entertainment press and on music blogs everywhere so for me to write a proper movie review at this juncture would just be redundant. Instead, it's time to look at this film biography from a slightly different angle and address a glaring omission director Bill Pohlad should have included.

This post offers no defense of Landy's treatment of Wilson during the time period depicted in the movie because it's a certainty that the caregiver totally controlled his victim/patient to the point he should have been considered a hostage. What isn't shown is that the crazy psychiatrist saved the life of the man who was the heart and soul of The Beach Boys.

How bad off was Brian? By the mid 70s his weight was out of control. He was well over 300 pounds. His intake of cocaine, alcohol, and heroin had become life threatening. He heard voices. His liver was failing and at one point he was found living as a vagrant in San Diego.

Dr. Landy first came into Brian's world in 1975 at the request of his first wife, Marilyn. His unorthodox treatment of Wilson worked for awhile but he was fired the following year because he attempted to double his fee. In 1982 Landy was asked to return because the star's physical and mental condition worsened and this time he was able to bring the troubled Californian back from the abyss. The doctor got him off drugs, put him on a major diet, and revived his health. No one, including the musician himself, ever disputes that. So, despite the horribly unfortunate truths of the film, it should have been mentioned that were it not for Landy it is likely Wilson would have died from his mental illness and addictions over thirty years ago.

Much of what happened to Wilson during the decade or so immediately prior to Landy's 1982 involvement was never fully developed in the film. Pohlad, by leaving so much out of the screenplay, never explained how the Landy-Wilson relationship was born or how the doctor came to control his patient so completely. Both are necessary components of the story.
Beach Boys Brian Wilson Movies