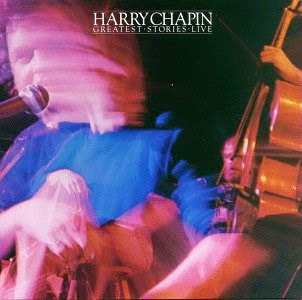 Whenever Harry Chapin took the stage you realized how much more dynamic he was live than on record. That is where he earned his reputation as one of the great musical story tellers of all time. His rapport with the audience was virtually unequaled and you could tell he loved every second of it. Often his records, regardless of subject matter, just didn't convey the same emotion.

People who happily saw Chapin live knew they were in for a treat even before they heard his 1976, double disc LP, Greatest Stories Live, because it included all of his best known work. Featured are "Taxi" and his biggest hit, "Cat's In The Cradle." There is also "W*O*L*D," a song that "snuck onto the charts for about fifteen minutes" according to Chapin, and the wonderful concert opener "Dreams Go By." He also included "Mr. Tanner," "I Wanna Learn A Love Song" and much more. The singer also closed with a lengthy and very funny story about a truck driver who lost control of his cargo in Scranton, PA on "30,000 Pounds Of Bananas."

Chapin was more than a folk singer. He wasn't just a man with a voice and a guitar. He toured with a very talented, full band that included his brothers who each contributed a song to his setlist: Stephen ("Let Time Go Lightly") and Tom ("Saturday Morning").

To his credit Chapin never let the his fun loving stage persona interfere with his music. While the man was very funny his involvement with World hunger was deadly serious and so is most of his music. I connected with Chapin more than I did with a lot of singer-songwriters because his songs were never opaque. He was a straightforward writer whose music was always lucid.

There are eleven live tracks on the original album and three extras recorded in a studio. Unfortunately, when the album was released on CD in the 90s two of the studio songs were removed in order to keep the package down to one disc. So, if you have the original album you've got the better version. Today, that problem has been eliminated because you can download the entire, original, 1976 album as Chapin intended you to hear it.

The three nights of shows were recorded in California and the quality is such that the live portion of the album sounds as if it was all played in a studio. Seldom do live albums come this close to perfection without sacrificing the feel of an onstage performance.

Because Greatest Stories Live is both a "best of" and a showcase starring the singer/activist in his natural element most people will find it to be all the Harry Chapin they will ever need. Real fans, of course, will dig deeper to discover there are a lot more of his stories that need to be heard.

This is a great album in every way possible.