Buried Treasure: Nat King Cole and His Trio - The Complete After Midnight Sessions (1956) 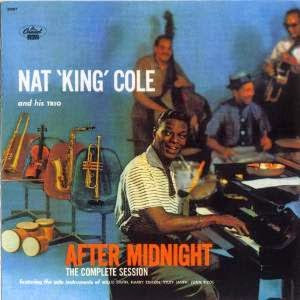 After Midnight was Nat King Cole's last jazz album and it was a beautiful return to form for the piano playing genius jazz fans dearly missed after the star decided to become a lounge singer/pop balladeer, a genre he also excelled at.

The trio included Cole on piano and vocals, John Collins on guitar, and Charlie Harris on bass. Lee Young (brother of Lester) was added on drums. What makes this album so special is that Cole's regular group is joined by several guest soloists, all of them all-stars, who are featured on different songs: Harry "Sweets" Edison (formerly with Count Basie) was the trumpeter, Willie Smith (Harry James and Duke Ellington) checked in with his alto sax, Juan Tizol (Ellington again) played valve trombone, and Stuff Smith, one of the first jazz violinists, completed the guest list.

The expanded lineup allowed Cole to add color to arrangements that his drummerless trio could not and the album is all the better for it. As usual, the leader's vocals were incomparrable and his speedy piano solo on "I Know That You Know" shows off his virtuosity as a musician. It's a joy to hear. Edison is at his best on an updated "Route 66" and on another Cole classic, "Sweet Lorraine." Willie Smith is in top form on "Just You, Just Me" and on the previously unreleased "I Was A Little Too Lonely." Collins is excellent on electric guitar.

The whole affair is very laid back and even when Cole and his crew locate a nice groove they still don't work up a sweat. That's what was always expected from his groups and they don't disappoint the listener here. Simply put, this is arguably the best long player Cole ever released.

The original 12 track LP was expanded to seventeen songs when released on CD in 1987 after five additional recordings were discovered.