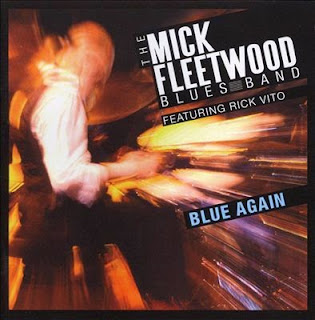 Veteran rocker Mick Fleetwood has returned to his roots. This means he's playing the blues once again, hence the title of this CD, an enjoyable, sixty-five minute, live-in-concert, musical excursion that he dedicates to the three other greats who co-founded Fleetwood Mac with him: Peter Green, Jeremy Spencer, and John McVie.

Fleetwood's very fine blues quartet features former Fleetwood Mac member Rick Vito, who was Lindsay Buckingham's replacement form 1987 to 1991, on guitar and lead vocals. Vito, who also played with Jackson Browne, John Mayall, Little Richard, Maria Muldaur, and a host of others, is the obvious star. His singing is perfect for fronting a blues group and his slide work is surprisingly tasteful.

Nearly half of the songs are attributed to Green. Among them are an outstanding rendition of "Black Magic Woman," a rambunctious "Rattlesnake Shake," and a featured bonus track, an updated studio take of "Albatross."

Other highlights include "When We Do the Lucky Devil" and "I Got a Hole in My Shoe" two of Vito's five original compositions on the set. His moody, slow burning, slide solo on Green's "Looking for Somebody" is riveting.

The quartet closed with an Elmore James favorite, "Shake Your Moneymaker," that should have you dancing in the aisles.

The blues-rock served up here by Vito and Fleetwood isn't groundbreaking but it doesn't have to be when it's played this well. They are having as much fun playing this stuff as we are listening to it.

The CD was recorded at The Sheldon Concert Hall in St. Louis, MO on February 8, 2008.

You can listen to the album here.