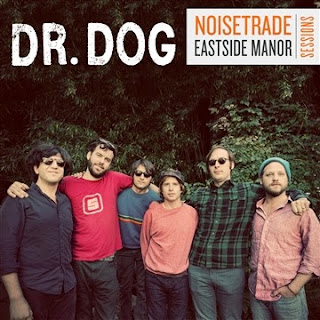 A good friend told me about the music download website, NoiseTrade, a couple of years ago and I'm glad he did. I've discovered some good sounds that I would never have heard otherwise and that's always appreciated. Some of what I found has even been reviewed on this blog such as a mighty fine, seven song, EP from the obscure Matt Stansberry & the Romance.

Not all of the music you'll find on NoiseTrade is by new or unknown talent waiting to be discovered and the site offers everything from hip hop to Christian music. Some artists will give you only one song, many an EP, and a few will offer full albums or even complete concerts. I've found tunes by established acts such as Brandi Carlile, Dawes, Susanna Hoffs, and Josh Ritter who currently has two full length concerts online.

Much of the music has been on the site for years but some of the downloads are taken down after awhile. Hoff's EP is one of those, so if you discover something you like take possession of it immediately because you don't know how long it will be there. When the download begins you are asked if you want to leave the artist a tip but if you choose not to it can still be yours for free.

Another nice feature about NoiseTrade is that unlike Amazon or iTunes you can listen to the entire track, album, or concert before you make your decision to own it.

Most of the music is from an artist's existing catalog, most are new releases, and occasionally you will find works that are only available through NoiseTrade such as this five song EP from Dr. Dog, The NoiseTrade Eastside Manor Sessions. The veteran Philadelphia sextet is a group that failed to embed themselves into my brain. I knew of them but I never really listened to their music so I was unable to formulate an opinion either way. When I saw their exclusive NoiseTrade sampler I thought I'd give them a try and I'm glad I did.

Dr. Dog's set, recorded just for NoiseTrade, is an excellent introduction to the band. "The Truth" and "To Weak To Ramble" are excellent ballads and the very upbeat and unique "Broken Heart" and singable "Distant Light" are different versions of songs that appeared on their most recent album, B-Room. The final track, "The Old Black Hole," is also a reworking of a song from an earlier CD, Be The Void.

These songs have a definite accessibility attached to them because of the group's ability to write melodies with good vocals but they also possess a creative edge that elevates them above the mundane. They're not afraid to experiment in the studio. The band can rock without overusing heavy electric guitars but they do employ banjos, acoustic guitars, and keyboards to great benefit.

I know this post ended up being more about NoiseTrade than Dr. Dog but I'm sure you see the point. Websites such as this one can go a long way toward giving an artist some much needed publicity. As the old ways of becoming successful and getting your music heard go by the wayside more and more every single day an online presence is almost mandatory. I never would have found Matt Stansberry on the radio but because of NoiseTrade I'm a fan of his band too.