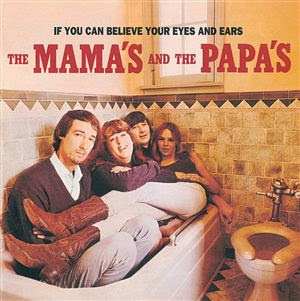 In their very early days The Beatles were known as a great covers band. The quartet not only played many of the more famous early rock 'n roll hits they were also admirers of a lot of obscure records they wanted to share with the World. But, after they achieved global fame, it wasn't long before other artists wanted to cover Lennon and McCartney.

"I Call Your Name" was a song John Lennon wrote before the famed quartet even existed. It eventually appeared on an EP in England and on The Beatles Second Album here in America.

In 1966 John Phillips, another artist with impeccable taste in cover songs and leader of one of the all-time great vocal groups, The Mamas & The Papas, recorded "I Call Your Name" for their first album, If You Can Believe Your Eyes and Ears.

Phillips took a rocking song and turned it into an uptempo ballad. His arrangement featured his quartet's beautiful vocal harmonies and outstanding lead vocals by Mama Cass Elliott and Denny Doherty. It was well known that Elliott had a huge crush on Lennon and she whispered his name in the instrumental break.

"I Call Your Name" was among the first covers of a Beatles' track to receive extensive radio airplay and on Philadelphia's top 40 radio station, WIBG, it was played in heavy rotation just like all of the hit singles of the day.

The Californians' version is a total reimagination of their English contemporaries' original. It's also one of the very few covers of a Beatles' song that is superior to their own.

Below are The Mamas & The Papas with a live performance of the song from The Monterey Pop Festival. This take is without Elliot's passionate pleas to the song's composer.