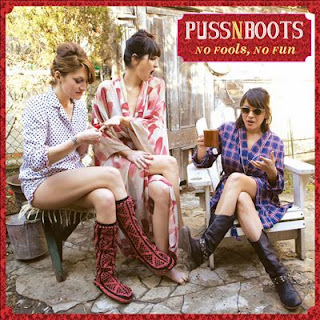 Other than the actual music one of the more endearing qualities about Norah Jones is that the anti-diva is among the few unselfish pop stars on the planet when it comes to sharing the spotlight with others. Her ego doesn't need to call attention to herself because she is all about the music.

While the singer-songwriter is the main attraction in The Little Willies she is not the sole reason to listen to that country band's two albums. She is even more selfless when teaming with Billy Jo Armstrong on Foreverly, the duo's tribute to The Everly Brothers, and now Jones has allowed herself to be nothing greater than one third of Puss N Boots, another country collaboration with Sasha Dobson and Catherine Popper.

Jones, Dobson, and Popper have been performing together since 2008 and this year they finally released an album, No Fools, No Fun. Only five of the songs come from the ladies themselves, the rest are cover versions, and there are four live tracks.

The only two songs that rock are "Don't Know What It Means," the only composition on the album written by Jones. On it she handles electric guitar duties like she was born to play rockabilly. It's immediately followed by a killer cover of Neil Young's "Down By The River" where she rips some great lead lines while sounding a lot like Young. Jones has mostly been known as a pianist but here she proves that she's no slouch with an axe in her hands.

The trio is not interested in playing to current trends at all. The ultimate proof is "In a Shanty in Old Shanty Town" which dates back to 1932. Their vocals on this chestnut as well as Tom Paxton's "Leaving London" feature pure, three part, country girl harmonies reminiscent of Trio, the great country roots disc by Dolly Parton, Emmylou Harris, and Linda Ronstadt. The difference is that Puss N Boots is rawer than that celebrated super group's first release. This isn't a criticism of the younger outfit because their sparse, often drummerless arrangements, are a perfect foundation for their vocals and songs.

The star's democratic role here also brings to mind Mark Knopfler's one-off sessions with The Notting Hillbillies, Missing...Presumed Having a Good Time, a country album with a group of unknowns on which the fabulous guitarist takes less than a starring role.

I have no idea if No Fools, No Fun is just a lark or if Puss N Boots will use this effort as a springboard into something more permanent. However, the music the three make on these fourteen tracks is completely worth your time and often a lot of fun.
Country Pop Vocals Rock 'n Roll