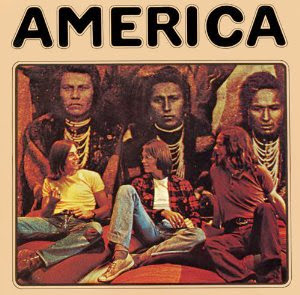 America the band took as many critical hits in their heyday as America the nation has recently but, unlike the latter, the trio's reputation is on the upswing.

Because America were firmly ensconced in the middle-of-the-road, soft-rock, sub-genre of the 70s they were often derided as lightweights but that is not a label that should have been pinned on them. Their first two albums prove the point. On their eponymous debut America made music that was mostly accessible but often out of the mainstream so it still captured the hearts of many rock fans devoted to high decibel, early 70s rock. The trio's followup, Homecoming with "Ventura Highway" and "Don't Cross The River," was almost as good but then they lost much of their edge even while maintaining their hit making momentum.

America was often criticized for sounding too much like Crosby, Stills, and Nash on their songs featuring vocal harmonies ("I Need You") and, when Dewey Bunnell sang lead, like Neil Young ("A Horse With No Name").

Bunnell, Gerry Beckley, and the late Dan Peek, who quit the band in 1977 leaving America as a duo that survives to this day, were better than their reputation. The musicianship on their records was often truly outstanding and many people were impressed with the sounds they produced using mostly acoustic instruments. (Of the twelve songs on the original LP only five featured electric guitar). They weren't shy about including extended instrumental passages in their songs ("Riverside") and they could lay down a solid groove on stalwarts like "Sandman." Other minor gems from the debut were "Here" and "Three Children."

Both the album and the famous single ("Horse") went to #1 on the Billboard Record charts.

"Sister Golden Hair" and "Tin Man" from the mid-70s are two of their better singles but, unfortunately, the eclecticism and originality that earned America so much early attention didn't last.