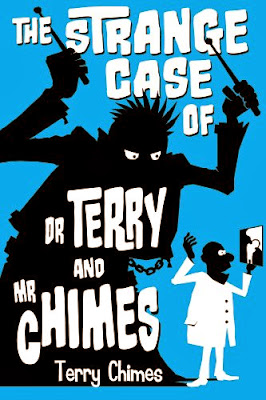 Terry Chimes (born July 5, 1956 in London, England), credited as Tory Crimes on The Clash's first eponymous album, was their original drummer and is a member of the Rock 'n Roll Hall of Fame.

Chimes is a very fascinating individual who is not your proto-typical punk-rocker. In his short, 167-page autobiography, The Strange Case of Dr. Terry and Mr. Chimes, the teetotalling, vegetarian, and spiritual rocker relates tale after tale about the rock 'n roll lifestyle and great insights about his famous band. He also tells us why he left the music business for a totally new, unrelated career.

Unusually for a punk-rocker, Chimes grew up in a loving, stable family with two parents. That difference immediately set him apart from Joe Strummer and his mates so Chimes often felt like he didn't fit in.

In addition, Chimes was not aligned with the angry, political left as the other members of The Clash were and he wasn't shy about benefiting from the riches and privileges that being in a major rock band could bestow upon him. On the other hand Strummer, Mick Jones, and Paul Simonin were quite vocal about giving their money away if the band eventually made any.

While all of this did create some friction in the band, the others wanted Chimes to remain a loyal member even though his unhappiness made him determined to leave. It even got to the point where Strummer offered the drummer his share of the band's profits if he would stay on after their first album began making some positive noise.

The rocker's departure from "the only band that matters" led to a discussion about one of the book's more important overriding themes: the promise Chimes made to himself to never work at a job he didn't love.

After the East Londoner left The Clash and was replaced by Nicholas "Topper" Headon he continued to work in hard rocking bands. He went on to play with Hanoi Rocks, Johnny Thunders, and Black Sabbath before the 80s came to a close. Then, after Headon left the band in 1982 due to his heavy drug addiction Chimes returned to The Clash but he stayed less than a year because the band broke up.

While in Sabbath's lineup Chimes experienced severe arm pain. When the band's chiropractor, a member of a profession he never heard of before, helped cure him a new spark ignited inside the still young man. When this internal fire spread the musician gave up rock 'n roll for twenty years and become a chiropractor himself. He eventually opened up a chain of practices across Britain. Then, when he felt that life was being sucked out of him again he followed his belief of doing only what he loves and sold the business. After the sale he went to work at one of his former offices and that allowed him more time to renew his musical interests.

Today, Chimes is still a practicing chiropractor. He is also a motivational speaker and continues to follow his musical muse in a new band.

Chimes still has genuine affection for most of his old band mates and he is still close with his family.

The author appears to be a deep thinker and his prose is clear, concise, and good enough to hold your interest. He should also be credited with the ability to find success in whatever path he pursued and in being his own man because he never allowed the excesses and lifestyle of the more glamorous of his two professions to control him.