March 27, 2014
This review was originally written for a small, short-lived website I began in 2001. Later the review was offered to and published online by a popular cultural arts webzine, Rambles.net. Then it was posted here in 2005 shortly after this blog began. Only thirty-two people have ever read it so it's time for an encore presentation, this time hopefully to a larger audience. 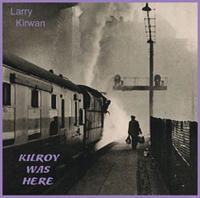 I’ve never been a fan of singer–songwriters. You know the genre, music created by folkie minstrels who play guitar while singing their own confessional songs. Most recordings and live performances by these artists feature sparse instrumentation with lyrics that are often far more important than the melodies, harmonies, and rhythms that accompany them. I have often wondered why these musicians just don't become poets.

Now, I'm not saying that lyrics are unimportant. Great lyrics enhance any musical experience. When the music and the lyrics mesh perfectly a song can be a truly moving experience. The most beautiful lyrics can be wasted if the music is not involving.

Larry Kirwan’s Kilroy Was Here, his first solo adult excursion away from New York City's resident Irish rock band, Black 47, (His children's disc, Keltic Kids, was his first solo CD) manages to be one of those rare instances when lyrics and music complement each other perfectly. One enhances the other. At no time does the music take a back seat to the wordy songs. This is not an easy feat.

Kirwan is one of the best lyricists in rock. His narrative style is reminiscent of Dylan. But his words are surrounded by musical arrangements that are far superior to almost anything else in the singer–songwriter genre. While Kirwan wants you to notice his profound lyrics he also wants the listener to take in a full musical experience.

Don’t expect this CD to sound like Black 47. No uilleann pipes or Irish folk instruments appear anywhere and while Kirwan and the musicians often get a good beat going, there is no hard rock, reggae or hip hop to be found. Trumpets, acoustic guitars, and strings predominate, with the musicians often giving the songs a jazzy texture such as on the "History of Ireland, Part One." Guest vocalist Suzy Roche adds beautiful vocals to the disc's opener "Molly." Particularly enjoyable is Black 47 sax man Geoffrey Blythe blowing a perfect solo on a cover of Paul Simon’s "The Only Living Boy in New York." The musicianship is superb throughout.

Despite the lack of an Irish sound to this disc there is no mistaking Kirwan's Irish roots on many of these tunes. In "Life's Like That, Isn't It?" he tells a story of a boy growing up in Catholic Ireland whose life events eventually cause the character to immigrate to America. Is the little boy in this story the author?

On the "History of Ireland" Kirwan simply and chronologically tells us all about the tragic history of his homeland, but the bright, upbeat, playful arrangement seems to tell us that Ireland has maintained her pride and better days are ahead.

Kirwan puts his multi-cultural experience of living in New York to good use on "Fatima," a story of an immigrant Muslim girl who falls in love with an American man. This grieves her father so much he laments that "Why didn’t they tell him back home that things fall apart in America." The song ends with a sad but believable ending that often occurs in a place such as New York where different cultures live and work together but cannot fully understand each other.

My favorite line on the entire disc is from "Spanish Moon" a song that is a commentary about poets trying to co-exist in the Spanish military dictatorship of the late Francisco Franco. Believing in the eternal power of the printed word Kirwan sings, "The poet lives forever, the general dies alone."

These are serious songs from a serious rock musician who can be proud of his work. It's a shame most Americans will never hear a note.
Buried Treasure Celtic Rock Larry Kirwan Singer-Songwriters