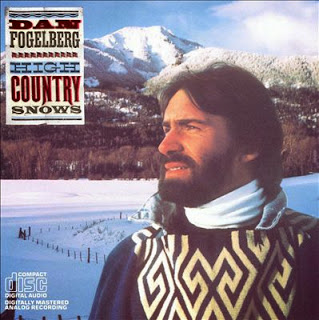 We have a double shot of forgotten music this month. Today's is a week earlier than usual.

One of my favorite music blogs, The Hits Just Keep on Comin', is mostly a look at Top 40 radio's colorful history but publisher J. A. Bartlett's highly entertaining and informative site frequently detours into other musical topics too.

More than once Bartlett challenged the late Dan Fogelberg's legacy proclaiming how "dorky" much of the singer-songwriter's music was and I can't say that the Wisconsin disc jockey's views are totally off the mark. Some of Fogelberg's records do cross the line but as my tastes have mellowed over the years I've come to appreciate him more.

Despite how I may feel about much of Fogelberg's over the top balladry that's not all the man was about because when his muse finally took him down a different path he made an album for the ages. On High Country Snows (1985) he combined his singer-songwriter gifts with a genuine love of bluegrass and country music (strains of these two genres were already incorporated into his work regularly) to give birth to the best, most intelligent, and heartfelt album he ever released.

You can tell Fogelberg was serious about his explorations into more traditional music by the company he kept during the sessions for the eleven song record. He not only covered Lester Flatt and Earl Scruggs on the very brief "Down the Road" he was joined in the studio by a full lineup of all-stars schooled in the genre: Jerry Douglas on dobro, David Grissman and Chris Hillman on mandolin, Vince Gill, Herb Pederson, Ricky Scaggs, Al Perkins (steel guitar), Doc Watson, and more. There are harmonicas, banjos, tambourines, and fiddles.

Highlights include "Sutter's Mill," a moving tale about the fate of many of the adventurers who traveled West to seek their fortunes during the California Gold Rush. Douglas plays some top notch dobro while Fogelberg tells the tale of the mostly sad endings many of the pioneers experienced once they arrived in the so-called promised land. For my money, it's the best song he ever wrote.  He sings in the chorus:


"Some would fail and some would prosper
Some would die and some would kill
Some would thank the Lord for their deliverance
And some would curse John Sutter's mill."
Another very good story is "The Outlaw," one of two tracks on the album by Jay Bolotin (a woodcut artist who also writes songs) about a man who becomes the title of this song in order to win the girl of his dreams (or so it appears).

The instrumental, "Wolf Creek," features both Fogelberg and Watson as acoustic guitar pickers with a flair and you can't help but tap your feet to the relentlessly upbeat "Shallow Rivers."

You can't blame Fogelberg for going to the bank with his usual fare but he should be credited for branching out and taking a risk, especially when the experiment is very successful.