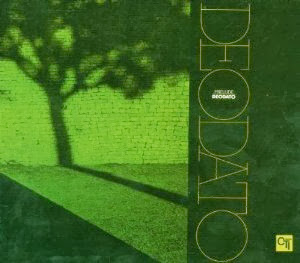 Brazil has been a hotbed of jazz for decades and, in case you haven't noticed, João and Astrid Gilberto and Antonio Carlos Jobim aren't the only stars South America's largest nation has sent to international fame. To prove my point there is Eumir Deodato, who recorded my all time favorite jazz-rock instrumental album, Prelude, a surprise chartbuster from 1972. Technically jazz but with a heavy rock influence, Deodato put together one of the more accessible fusion records of all time with all-stars John Tropea (electric guitar), Airto Moreira (percussion), and Billy Cobham (drums) by his side. Ron Carter and Stanley Clarke shared bass duties. Deodato played piano and lots of Fender Rhodes.

The six track platter became the largest selling album the now defunct CTI Records ever had.

The shortened hit single culled from the album was "Also Sprach Zarathustra." It went to #2 on the pop charts in the USA and won a Grammy in 1974 for Best Pop Instrumental Performance. It also went into the top 10 in the UK and Canada. The much longer, LP version that opened the album was 9:00. To his credit Deodato always kept Richard Strauss's original melody in full view while adding a whole lot of funk and inventive solos by Tropea and Clarke.

On another adaption of a classical piece, Claude Debussy's "Prelude to Afternoon of a Faun," Hubert Laws plays some very nice flute while Marvin Stamm takes the honors on trumpet. The track's combination of classical, jazz, and easy listening pop works well and is in quiet contrast to the raucous "September 13," the most rocking tune on the record. Dominated by another excellent Tropea solo you can be excused if you consider this loud and briskly paced Deodato original to be more rock than jazz.

There is "Baubles, Bangles, and Beads" an old pop standard that gives Tropea another moment in the spotlight and allows Carter a chance to solo.

Two more compositions by the leader round out the record: the soft, string laden, "Spirit of Summer" and an uptempo ode to two very popular women singer-songwriters of the period, "Carly and Carole."

Deodato followed up his 70s hit with additional albums that were produced in the same vein as Prelude but they didn't come close to generating the same interest. The pianist continued to have a long and varied career but he was never again a big presence on the charts. Today, he remains a highly regarded producer and arranger who continues to record into the new century.
Instrumental Jazz Rock 'n Roll