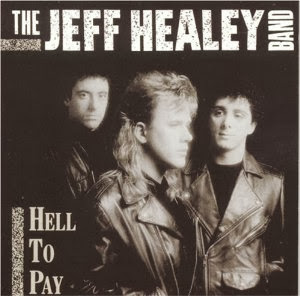 The Jeff Healey Band, a power trio with Joe Rockman on bass and Tom Stephen on drums, could have been considered Canada's answer to Stevie Ray Vaughan's Double Trouble. The small outfit was more of a traditional rock band than Vaughan's group and, like the esteemed Austin blues-rocker, they were proof that the eighties and pre-grunge nineties weren't all synthesizers, gadgets, and gimmickry.

The band's sophomore release, Hell to Pay (1990), is a fine followup to 1988's See the Light. Healey, a Toronto native who was one of the Great White North's top rockers at the time, received a Juno "Album of the Year" nomination for this butt-kicking CD that rose to #5 in his homeland, #18 in the UK, and #27 here in America. It was his highest charting effort ever.

You can tell the album was put together with thoughts of hitting the big time because of all the heavyweight talent that lent a hand during the sessions. The eleven song disc featured six originals, four co-written by the band with their leader, and five very good covers.

The unquestionable highlight is Mark Knopfler's guitar and vocals on his own "I Think I Love You Too Much." While Healey is no slouch on lead the former Dire Straits' boss elevates everything he touches and this track is no exception. Bobby Whitlock helps out on Hammond B-3.

Both George Harrison's and Jeff Lynne's acoustic guitars back Healey on The Beatles' "While My Guitar Gently Weeps." While it's not as outstanding as the original from The White Album Healey's electric axe work and vocals keep the spirit Harrison infused into his version very much alive. Paul Shaffer's keyboards add some color that is often missing from the guitar trio format due to its limitations, not only on this track but throughout the album.

"How Long Can A Man Be Strong," borrowed from Steve Cropper and Little Jimmy Scott, is also top notch.

Hell to Pay shows Healey to be more of a musician than a writer. His own songs are fine but this album is at its best when he's interpreting other people's work. That's a good thing if you know how to pick top flight material, and for this outting he certainly did.

The star was known for sitting and playing electric guitar on his lap. This may not have led to some unique sounds but it certainly set him apart from everyone else.

Healey was a talented musician, who in his later years, taught himself to play trumpet. Early American jazz of the 1920s and early 30s was actually his first love and he recorded three albums of vintage stuff playing the instrument Louis Armstrong made famous.

Healey's blindness during infancy resulting from a rare form of eye cancer never slowed him down but his early death from lung cancer at age 41 took an unusual talent from both the rock and jazz worlds.