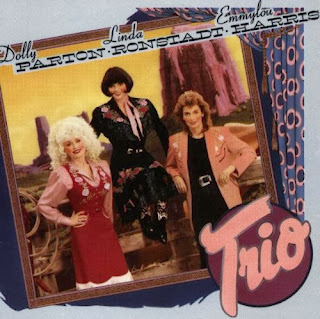 In 1987 three great female talents formed a vocal ensemble for the ages. In a true collaboration, Emmylou Harris, Dolly Parton, and Linda Ronstadt blended their voices together perfectly to record Trio, producing beautiful, Appalachian style, three-part harmonies in the process. They created the kind of music you envision hearing in Parton's Smoky Mountains on 1940's AM radio, back when banjoes, dobros, fiddles, and acoustic instruments ruled, back when the music was still called country and western, and before it became a huge, more urban-centered business.

Harris, Parton, and Ronstadt worked together without considering their own egos and the sessions were an obvious labor of love for all involved. One of the finer examples that demonstrates the respect they have for each other is Parton giving Harris the lead vocal on her self-penned piece, "The Pain of Loving You."

Jimmie Rodgers' "Hobo's Lament" is a perfect vehicle for Ronstadt. "Wildflowers" and "Those Memories of You" show off Parton's abundant vocal abilities. The traditional "Rosewood Casket" is another gem. Perhaps the highlight of the album is the old 1958 pop hit by The Teddy Bears, "To Know Him Is To Love Him." The Phil Spector tune doesn't have country origins but its arrangement and perfect mix of voices allow it to fit in brilliantly with all of the traditional stuff.

There isn't a trace of rock 'n roll anywhere on the CD, even in Ronstadt's contributions. While she is the least country of the three her more powerful voice is needed to give the group's harmonies additional depth. Parton brought along a couple of great songs and both she and Harris provided the rural sensibilities that were essential to the success of the entire affair. Take away any of the three ladies and Trio is a less powerful artistic statement.

The work these stars produced isn't for everyone but for those of you with minds open enough to know good music when you hear it, regardless of genre, Trio is a very fulfilling experience. Enough people liked the CD to send it to #1 on Billboard's country chart and to #5 on the Hot 100. It sold over four million copies, and won two Grammy Awards.