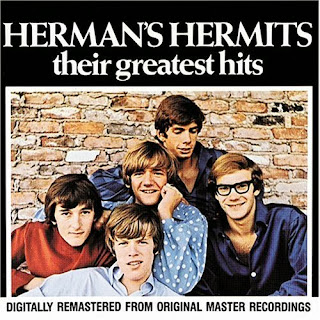 Sometimes you attend a concert to absorb a great musical experience where the performers are true artists and you can fully bask in the glory of their stellar vocals, songwriting, or musicianship. Then there are the times you go to a show just for a good time that is steeped in nostalgia. Former Top 40 hitmaker Peter Noone, and his 21st Century version of Herman's Hermits, played at the cozy Sellersville Theater on Sunday and they definitely fall into the latter category.

Noone and his four mates entertained an almost totally baby boomer crowd with tons of hits from their 1965 to 1967 stateside heyday plus a bunch of covers from other band's catalogs from the same era, the highlight of which was a very nice version of The Dave Clark Five's ballad, "Because."

Also on the set list were a couple of "B" sides. Right before Noone sang "The End of the World," the flip side of "I'm Henry the Eighth, I Am," he said it was his favorite Hermits tune.

Every song could have been a sing-a-long. Many featured arrangements that were close to the band's well-produced hit records. Favorites included "No Milk Today," "Silhouettes," Something Good," and "Can't You Hear My Heartbeat." Noone also served up "Mrs. Brown, You've Got a Lovely Daughter," "Dandy," "Wonderful World," and an overly campy version of "Henry" complete with required audience participation. We were also treated to a couple of the band's lesser hits: "Just a Little Bit Better" and "Leaning on a Lamp Post." The encore was "There's a Kind of Hush." Missing were a "A Must to Avoid," "Listen People," and a handful of others.

Noone was very comfortable interacting with the audience and it was his bright and sunny rapport that made the show truly entertaining. His sense of humor sometimes came across as rehearsed but it fit the lighthearted tone of the concert quite well. He made fun of his age as well as the ages of the soon to be elderly baby boomers filling the seats. He also did a great Johnny Cash impression during a brief "Ring Of Fire." He later danced and contorted his body and face into his much more famous British Invasion contemporary, Mick Jagger, as he and the band broke into a satirical take of "Jumpin' Jack Flash."

The sixty-six year old frontman still has a fine voice and his more than competent group ably assisted him.

The evening's biggest surprise was the almost groupie-like atmosphere among some of the fans. It's hard to believe the number of people who appeared to idolize Noone and had obviously been to his concerts before. They were wearing Herman's Hermits' World Tour jackets and brought stick lights to waive in the air during songs. Actually, maybe we shouldn't be astonished. Sunday night was the second of two sold out performances that day at the approximately 300 seat venue. The band sold out a pair of shows at Sellersville last year too.

Unlike Bruce Springsteen's legendary live concert extravaganzas seeing Herman's Hermits will not become habit forming. However, if you're looking for a fun evening out while reliving some "groovy" memories from the 60s in the process, it wouldn't hurt you to see an artist who sold almost 60,000,000 records should he and his band happen to come to your town.