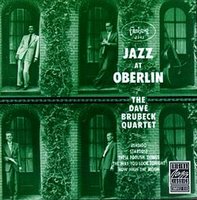 Jazz At Oberlin features Dave Brubeck on piano and Paul Desmond of "Take Five" fame on alto sax as well as bassist Ron Crotty and drummer Lloyd Davis. The four played the groundbreaking concert captured on this album at Oberlin College on March 2, 1953.

At the time this performance was on the cutting edge of jazz with both Brubeck and Desmond playing their best. The leader's piano is both frantic and melodic and he proves the really great jazz musicians are always better live than they are on record. As for Desmond's work, I normally prefer the tenor sax due to its deeper and richer tone but his alto work here is perfect.

The five song CD opens with a slow but slightly off-kilter version of "These Foolish Things Remind Me of You" followed by "Perdido," a very fast jam session that sounds just as contemporary today as it did in 1953. The group follows them up with reworkings of three more standards: "Stardust," "The Way You Look Tonight," and "How High the Moon," all with arrangements ahead of their time.

Jazz At Oberlin was originally released on LP in 1953 and on CD in 2003 on Fantasy Records. It's too bad that we only get thirty-eight minutes of that great night because small group jazz doesn't get much better than this. A release of the whole event would surely be welcomed by all of Brubeck's fans.

This concert is still available on CD at Amazon where you can hear some very cool samples.

Jazz at Oberlin was an anomaly when the band performed this two hour plus set that gave birth to the college's interest in the genre. Previously the school's Conservatory of Music only favored the classical repertoire of the great composers. For a detailed history of how Brubeck's concert changed Oberlin's music school forever, and how the school became a haven for jazz music, read this article posted on the school's website.
Buried Treasure Dave Brubeck Instrumental Jazz Paul Desmond