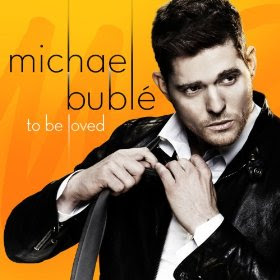 Working with Bob Rock, his new producer, may have inspired Michael Bublé (not that he's ever sounded as if he's needed inspiration) because on To Be Loved the singer soars through fourteen new entries to his catalog as if he's never had this much fun in his life.

Bublé's public persona is that he's too nice of a guy to have traveled with the original Rat Pack but, as usual, musically he would fit right in with his updated, 21st century, version of the old gang's act. The Pack's leader, (Frank Sinatra, of course) would wholeheartedly approve of Bublé's swaggering version of "You Make Me Feel So Young" that opens the album as well as his duet with Reese Witherspoon on "Something Stupid." "Young at Heart" also rivals Old Blue Eyes' more famous arrangement.

Among the older offerings is one of the first country songs to crossover onto the pop charts. "Have I Told You Lately That I Love You" (not the Van Morrison - Rod Stewart song) was a hit for a husband and wife team, Lulu Belle and Scotty, way back in 1945. Buble's new version almost sounds, but not quite, as if The Jordinaires are backing him up.

Other gems include a Latin-flavored interpretation of Jimmy Van Heusen and Sammy Cahn's "Come Dance With Me" and The Puppini Sisters harmonize superbly on "Nevertheless (I'm In Love With You)."

More recent fare includes Smokey Robinson's "Who's Lovin' You," a very nice cover of an old Bee Gees' chestnut, "To Love Somebody," and Randy Newman's "You've Got A Friend In Me."

The most soulful track the classy star ever laid down, the title song, was originally put on vinyl by Jackie Wilson a long time ago.

The CD has four co-written originals, the most ever to appear on a Bublé disc. On their joint effort, "After All," The Canadian duets with his fellow countryman, Bryan Adams. It's the most rocking number he ever released. The new single, "It's A Beautiful Day," at times reminds the listener of his recent classic "Haven't Met You Yet."

Overall, this exuberant and eclectic album is quite possibly the singer's best release to date (I think I may have said that about his last one). For his fans it's a must listen.