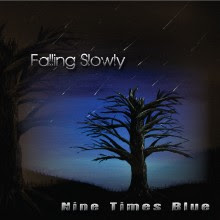 Power Pop, so named by Pete Townsend, has always been one of rock's most loved sub-genres and for good reason. With its emphasis on song structure, melody, strong lead vocals, and heavy guitar riffs that don't meander into long solos it's music that is readily accessible.

Power Pop was part of the makeup of everyone from the early Beatles, The Kinks, The Who (pre-Tommy), The Raspberries, Nick Lowe, Squeeze, The Posies, Marshall Crenshaw, and a host of others. More recent acts such as Fountains of Wayne and Del Amitri have also become important representatives of the style. Now we can add to the list, Nine Times Blue, a mighty fine new quartet named after an old Michael Nesmith song.

The Atlanta outfit's debut CD, Falling Slowly, could easily have been a hit if it had been released in an era when groups like this one received regular radio airplay.

The disc is loaded with ten original songs that check in at a concise thirty-eight minutes. The band sounds a lot like Arizona's Gin Blossoms (especially on the loud, barn-burning title track) with a little Smithereens thrown in for good measure (catch the heavy bass intro to "Million Miles" as an example of the latter).

Nine Times Blue's chief songwriter and lead vocalist, Kirk Waldrop, is obviously the man in charge and he should make no apologies for being the leader. He handles all of the challenges required of him as easily as any veteran who has ever rocked.

Falling Slowly is not pretentious, nor deep, but it's music isn't trite either. It's also one of the best albums I've heard from a fledgling outfit in a long, long time.

You can read more on Nine Times Blue's official website and buy the CD at Amazon.