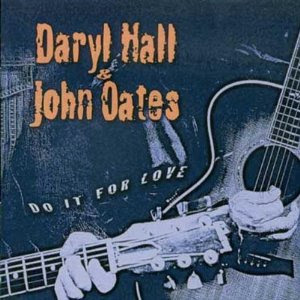 After a seven year hiatus Daryl Hall & John Oates returned with a new CD in 1997, Marigold Sky. Because many critics and fans who heard it appreciated only parts of the uneven effort the album turned into a non-event.

Ten years ago this month, and more than thirty years after their debut album appeared, the best-selling veterans tried again and this time, they gave the world a big surprise by releasing one of the best albums of their career, Do It For Love.

Time away from one's day job often revitalizes people and it can be the same with artists. Do It for Love is a truly inspired set of songs with great lead vocals (once again, mostly from Hall) and excellent, instantly recognizable, blue-eyed soul harmonies from both. Just as importantly, the two Philadelphians moved away from (but not entirely) their glossy 1980s production values. The vocals are more upfront and center than they were during their heyday of making corporate, new wave, pseudo-soul, and while this CD doesn't sound at all like the outstanding Abandoned Luncheonette it's the closest they have come to their roots since the 70s.

Easy to absorb melodies abound. Hall's "Man on a Mission," "Forever for You," and "Getaway Car" are highlights and a very nice cover of New Radicals' "Someday We'll Know" (with Todd Rundgren) rivals the original.

Oates' closing tune, "Love in a Dangerous Time" proves that while he isn't a composer who offers up a catchy chorus or two as easily as his more prolific mate can, the guitarist's more album-oriented fare is just as worthy (for further proof listen to his last two solo CDs).

There are no weak songs anywhere on this fourteen track return to form.

________________________________________
In a related topic, 2013 is the fortieth anniversary of the release of Abandoned Luncheonette. To celebrate the event the local newspaper, The Reporter, recently published a story about the real diner, the song that inspired the original LP's cover, and how the rusty old shell became a local landmark. You'll also learn about Sara Allen and how she became the inspiration for two Hall and Oates' songs: their first top ten hit and "Las Vegas Turnaround" an Oates number from the same album.
Buried Treasure Hall and Oates Rock 'n Roll