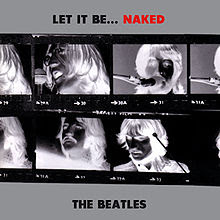 This appropriately titled reissued edition of Let It Be released in 2003 is something that was talked about and wished for by Beatlemaniacs for decades, ever since the Beatles' internal squabbles allowed Phil Spector to muck up the original album in 1970.

By the time the quartet was done with the recording sessions that accompanied the film the four bandmates were sick of the music and each other so the quite eccentric and infamous producer was brought in to try and salvage something good from the whole, tense affair. As John Lennon so famously said after he heard Spector's completed work, "..... he made something of it. When I heard it, I didn't puke."

For those who don't know, Let It Be...Naked is a remixed and revised version of The Beatles' last official album.  It will always be considered a minor part of their catalog but this updated CD, minus the the overly flamboyant clothes Spector used to gussy it up, is a better work of art.

The impetus behind this release was to fulfill the goal The Beatles originally intended while making the album: just the four of them playing in the studio while going back to their roots to make bare bones rock with little or no overdubs. It would be the anti-Sgt. Pepper.

Even before you listen to a single note you will see many differences between the two discs just by glancing at Naked's new cover. First, you'll notice the completely changed track sequencing. Also, two worthless song snippets, "Maggie Mae" and "Dig It" were removed from the new version in favor of the quite good "Don't Let Me Down," a song that was part of the recording sessions for both the album and film but left off the final product. Originally, the song had only been released as the flip side of "Get Back."

Then there is the actual music. All of the little extraneous conversations and side comments were removed from the intros and endings of the songs, a welcome change that made the 1970 album feel too much like rehearsals and unfinished tracks.

All of Spector's pretentious orchestrations and/or girl choirs were removed from "Across the Universe," "I, Me Mine," "Let It Be," and most notoriously, "The Long and Winding Road." The only non-Beatle who appeared on any of the tracks was keyboard player Billy Preston whose excellent and unique work provided some much needed spark to the proceedings.

Every song was edited or remixed in some fashion. Some minor overdubbing was used. Examples include "Winding Road" which added electric piano and guitar that weren't on Spector's version. The new "For You Blue" added some acoustic guitar. For "Get Back" The Beatles used the 45 RPM version but without its famous coda.

Also included in the package was a bonus disc with almost twenty-two minutes of dialogue and musical excerpts recorded during the 1969 filming. These boring outtakes are a once and done listening experience.
Beatles Classic Rock