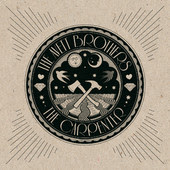 The Carpenter, The Avett Brothers' sixth studio album, is their second major label release and it's also the second one in a row with the renowned Rick Rubin in the producer's chair. It's also a thoroughly enjoyable set that is doing well on the charts.

The Avetts are correctly labeled as a country-folk band. However, you can also call them yuppie-country or urban-country (No, They're not oxymorons). Once you hear their work you'll understand.

On The Carpenter the Avetts alternate soft, nice and easy ballads ("February Seven," "The Once and Future Carpenter," and "Through My Prayers) with up-tempo fare such as the banjo driven "Live and Die," a supremely catchy song that is getting all of the airplay it deserves on adult alternative radio. "I Never Knew You," with its 60s, Southern California vocal harmonies, is as effervescent as acoustic power-pop can get. "Down With The Shine," features a horn section and sounds like it could have come from from Robbie Robertson, Levon Helm, Rick Danko and company.

The brothers have a rock 'n roll attitude that shows up in both their singing and their songs. They're capable of screaming their lyrics, and they don't always just gently strum or pluck their instruments, so it's not too hard to imagine them plugging in. When they do go electric, as on the strangely titled "Paul Newman vs. the Demons," they're capable of concocting an ear-splitting modern rocker with exploding feedback.

Those acoustic newcomers, The Lumineers, are making all of the headlines lately but The Avett Brothers make better music. Their melodies are prettier, they have better voices, and their overall sound is fuller, making their songs much more satisfying.