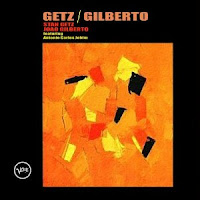 Many jazz purists who hate the whole smooth jazz scene have partially blamed American saxophonist Stan Getz, Brazilian guitarist/singer João Gilberto, and their famous 1964 classic album, Getz/Gilberto, for contributing the DNA that allowed Kenny G and other related criminals to run amok in the music world. However, their hate is completely misdirected and after listening to this eight song set recorded by the first two "Gs" you’ll understand why.

Getz and Gilberto teamed with another famous Brazilian, pianist Antonio Carlos Jobim, who co-wrote most of the tracks on this album that jump-started an international craze for Bossa Nova. This somewhat dated, lighter jazz style thrives on vibrant melodies with upbeat tempos that are mostly supported by light and loose drum and percussion work. The guitar playing is mostly acoustic. The vocals are usually soft, tastefully refined, and often mysteriously sexy. All of these components thrived together in an atmosphere that created a very modern, cool, 60s groove without cranking up the amps. Bossa Nova is mood music that proves tempo and feel is often more important than volume.

The highlight of Getz/Gilberto is it's opening track, perhaps the sub-genre's most famous song, "The Girl from Impanema," featuring guest vocals by Astrud Gilberto who was João's wife at the time. Her performance on the song was not only her very first professional gig it supposedly was the first time she ever sang outside of her home. (According to Wikipedia, the single version of "Impanema," with Getz playing and Astrud singing without her husband, reached #5 on the American pop chart). She also contributed vocals to another one of the album's tunes, "Corcovado." Nevertheless, her two appearances on this blockbuster album turned her into a worldwide star.

João Gilberto sang on all eight tracks and always in Portugese, while both of Astrud's contributions were in English. Unfortunately, because 85% of the lyrics were sung in a foreign tongue much of their emotional value was probably lost on Americans so it's surprising that the LP racked up such large sales figures here at home.

Such was the impact of this LP that it won the Grammy Award for Album of the Year in 1965. It was the only jazz album to be so honored until Herbie Hancock won the same award almost half a century later in 2008.