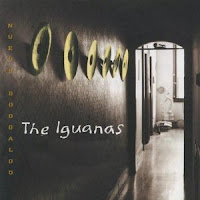 I've become a big fan of the great HBO drama series, Treme, (named after a neighborhood in New Orleans) in large part because of all the great music and nationally known artists the show features in every episode. A partial list includes Shawn Colvin, Dr. John, The Nevilles, The Preservation Hall Jazz Band, and Steve Earle (whose character recently met an unfortunate, violent demise at the hands of a couple of street thugs). There was also an appearance by a very fine live quintet, The Iguanas.

For those of you unfamiliar with this cool little band from The Big Easy they have been making music together since the late 80s and, despite the abundant Cajun and zydeco influences of their hometown, the sounds they make are also heavily seasoned by band founder Ron Hodges' Hispanic heritage.

The Iguanas lineup includes two saxophones and sometimes an accordion mixed in with the usual rock instruments. They also weave a little piano into their arrangements. Their two sax players, Joe Cabral and Derek Huston, mostly play in perfect, harmonic unison but they can duke it out the way Dickie Betts and Duane Allman often did with their guitars. Either way, The Iguanas' reed men offer a unique sound that the band uses to their full advantage.

The Iguanas have often been compared to Los Lobos, the great band from East L. A. However, there are differences between the two groups. Nuevo Boogaloo, their second album, earned the Louisiana based band some well-deserved recognition back in 1994 in part because it has a sense of humor that is often lacking in Los Lobos' music. Both "Oye Isabelle, and "My Girlfriend is a Waitress" bring a smile to your face just by hearing the song titles. Even the album title is fun.

"Boom Boom Boom" and "Hey, Sweet Darling" are straight ahead, unadorned rock songs that so many Americana bands play so well.

Nuevo Boogaloo is a typical Iguanas album in that it offers a mixture of styles while never straying too far outside of the band's comfort zone. Like most ethnically charged roots rock outfits they're proud of their heritage and it shows in their music. The decision to follow their hearts is admirable but, unfortunately, it keeps their work off the radio and sends it into obscurity.