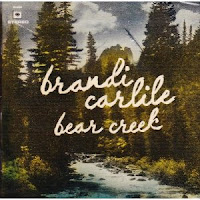 Brandi Carlile is all grown up now even though she's still young at age 31. However, on her new CD, Bear Creek, she's already reflecting back on her childhood ("Keep Your Heart Young" and "Just Kids"). She fondly remembers her youth and hints that we should hold onto it for as long as we can even while we enjoy the increased wisdom that comes with growing older.

Carlile is also beginning to show a bit of a spiritual side. There are religious references in the CD's liner notes and in the lyrics to the mighty rocker "Raise Hell," the sweet sounding "That Wasn't Me," and the cerebral "100".

Not only have Carlile's songs grown even more introspective over time Bear Creek sounds gorgeous too. Her always pleasing vocals are as powerful as ever, and her sense of melody is even more pronounced, perhaps because the new disc is more country influenced, offering less rock than all three of her previous studio efforts.

Some of the tracks feature cellos and violins that respect the songwriting, meaning they're not just intended to be middle-of-the-road backgrounds that soften the arrangements to make them more palatable for mainstream audiences. The strings have front row seats and contribute to the often melancholy mood. They alternate with tunes such as the vibrant "Hard Way Home," a song that deserves all of the radio airplay it's receiving.

As always, Carlile's twin appendages, The Hanseroth Brothers, are at her side and they prove once again that they are full collaborators, not just sidemen. Not only are they well-rounded multi-instrumentalists the brothers have as many composing credits on the album as Carlile does and three of the compositions are theirs alone.

Overall, Bear Creek just might be Carlile's strongest outing yet. Every song is worthy of your time. It's scary how good she could become if this trend continues.
Brandi Carlile Country Rock 'n Roll Singer-Songwriters