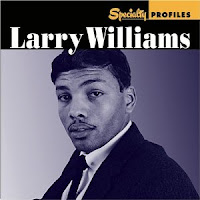 Piano playing, rock pioneer Larry Williams (1935 -1980) is virtually forgotten today except by the dwindling number of people who know him through The Beatles.

Williams won his fifteen minutes of fame in 1957 and 1958 by taking Little Richard Penniman's place at Specialty Records after the star quit rock 'n roll to become a minister. Specialty put a lot of work into grooming Williams to sound as similar to Little Richard as possible because of the potential they saw in him and because their big time cash cow was no longer on the label's roster.

In relatively quick fashion Williams scored two gold records with "Short Fat Fannie," and "Bony Moronie." "You Bug Me Baby" and "Dizzy Miss Lizzy" also charted but, unfortunately, his success in America didn't last. However, his career in the United Kingdom was a bit more enduring. There, he was popular enough to heavily influence the rockers of the original British Invasion.

John Lennon was a huge fan and he saw to it that during The Beatles' early years they put three of Williams' tunes on vinyl: "Slow Down," "Bad Boy," and "Dizzy Miss Lizzy." Lennon released both "Bony Moronie" and "Just Because" (Williams first hit written by Lloyd Price) on his 1975 oldies album, Rock 'n Roll. The Rolling Stones covered, "She Said Yeah."

Living on the seedy side of life derailed Williams' career. He became a drug addict who was prone to violence. Specialty dropped him in 1959 for selling drugs and by 1960 he began a three year prison term. He was a good friend of Penniman's despite the fact he tried to kill the flamboyant pianist in 1977 over a bad drug deal. Eventually he took his own life at age 44 with a gunshot wound to the head.

Williams recorded quite a few singles but only one full length LP by the time he went to jail and his days of being in the limelight were over. He attempted two career revivals, one in the mid-60s and later near the end of the 70s. Both failed.

Musically, Williams work stands up to any of the era's biggest stars. He could play head banging piano, ballads too, and his vocal style was similar to that of his more famous label mate. He was just as comfortable covering other people's work as he was recording his own compositions.

You can still find an excellent compilation with all of Williams' best stuff on CD or in the mp3 format at Amazon and iTunes.
Buried Treasure Rock 'n Roll