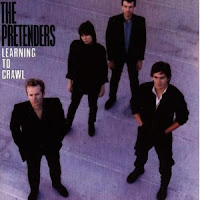 While many prefer The Pretenders 1979 eponymous debut, in reality Chrissie Hynde's finest album arrived on the scene after two tragedies forced her to revamp her hard rocking British band's lineup. After the drug related deaths of both guitarist James Honeyman-Scott and bassist Pete Farndon only Hynde and drummer Martin Chambers remained from the band that recorded the group's first two critically acclaimed albums. Hynde replaced Honeyman-Scott with Robbie McIntosh and Farndon with Malcolm Foster. It would be this new group that recorded 1984's Learning To Crawl. By this time Hynde was well aware she couldn't continue her rock n' roll lifestyle without taking a chance on ending up just like her two late bandmates and her new-found maturity was discussed in this LP's ten songs. Learning to Crawl opened with "Middle of the Road" where the singer admits she's "not the cat I used to be, I've got a kid, I'm thirty-three." "Back on the Chain Gang" is a nice tribute to Farndon and Honeyman-Scott and it became one of the band's biggest hit singles. Its flipside is even better. "My City Was Gone," a song Rush Limbaugh tried to ruin by using it as bumper music on his daily show, is outstanding. It features great guitar work, a solid backbeat provided by the revamped rhythm section, and Hynde's very angry and expressive vocals on a song about the plight of run down, economically depressed, American, industrial towns. Both sides of the single featured Billy Bremner of Rockpile on guitar before McIntosh was recruited into the band. The rockabilly influenced "Thumbelina" is a toe-tapping romp in which Hynde tells her young daughter that life may not always be easy but together they'll make it through this "great, big, scary world" and "2000 Miles" has become a Christmas standard. "Time the Avenger" and "Show Me" received deserved radio airplay and there is even an effective cover of the R & B ballad, "Thin Line between Love and Hate." Only "Watching the Clothes" is a bit silly. The song takes place in a laundromat but it again proves that Hynde is starting to realize that life for most people doesn't revolve around being a rock star and the often self-centered, instant gratification that goes along with it. The Pretenders always sounded like they were the love child of The Rolling Stones and The Clash. Add to the mix Hynde's thoughtful and intelligent lyrics and what you get is one of the best releases of the early 80s. The combination makes it a nearly perfect record.