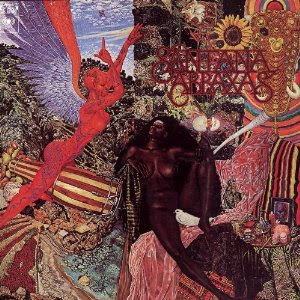 Unique is a unique word and it's commonly misused. It means one of a kind, so when people say "very unique" or "most unique" the word is improperly employed. However, if an additional superlative was ever needed to describe an album of music it would apply to Santana's outstanding second LP, Abraxas, released in the fall of 1970. With deep apologies to Los Lobos, Los Lonely Boys, Richie Valens, and every other Santana record ever made this album has to rank as THE single greatest Latino-rock release of all time. It's also one of the greatest rock albums recorded by anyone, anywhere, anytime.

In hard rocking 1970 this platter didn't just blast away at you. It's colorful and often intricate arrangements fused rock, salsa, and jazz together and was presided over by nominal leader, Carlos Santana, who quickly became one of the best rock soloists on the scene. Santana didn't just jam. He played melodies too and the group's percussionists were among the best in the business. Congas, bongos, and timbales are everywhere.

The disc's outstanding track is the subtle but exciting "Samba Pa Ti," one of the most tasteful guitar instrumentals ever put on vinyl. It's a tune that helped me understand the meaning of virtuosity. "Black Magic Woman" was the radio hit and a top selling single. "Hope You’re Feeling Better" is the hardest rocking entry and it's the closest thing on the disc to straight ahead rock 'n roll. It could have been a hit too. The album opener, "Singing Winds, Crying Beasts" is mysterious free form music that sounds like a band being blown about in the wind and it is completely unclassifiable to a specific genre. "Oye Como Va," "Incident at Neshabur" (another instrumental), and "Se a Cabo" couldn't be more different from each other, meaning this album never runs out of fresh ideas.

Carlos Santana received most of the attention but the San Francisco sextet was full of outstanding sidemen who contributed just as much to the affair as he did. It's hard to believe that keyboardist Gregg Rolie who played on this album, and Neal Schon, who joined the band after Abraxas was completed, later left to form Journey.

The LP's title comes from Demian, a novel by Herman Hesse, and is quoted on the back cover.