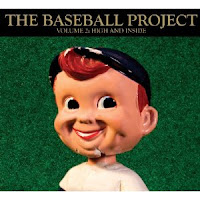 The Baseball Project is a quartet consisting of four rock music veterans, all of whom have staked out a nice reputation for themselves in other bands. The starting lineup is Steve Wynn, founder of the 80s band, Dream Syndicate, his wife, drummer Linda Pitmon, and recent free agent, Peter Buck of R. E. M. The clean up hitter is Scott McCaughey of The Minus Five who later became an unofficial member of Buck's late, great band during their final years together. The four assembled for this side project because McCaughey and Wynn, two huge baseball fans, decided to start a band with a unique concept. All of the songs would be about their favorite sport.

Volume 1, Frozen Ropes and Dying Quails, was released in 2008 and Volume 2, High & Inside, was released last year. Of course, dedicated baseball fans with knowledge of the sport's rich history will appreciate these two albums more than anyone else. However, because the songs are also history lessons and commentaries on life it's possible that others will find something to enjoy while listening to them too.

These four are all seasoned major leaguers so the music is top notch. Volume 2 is tightly arranged, well played, modern rock, and if you ignore the lyrics the thirteen song set can be enjoyed simply as good, alternative rock music. There are guest appearances by Steve Berlin of Los Lobos, Ben Gibbard, lead singer for Death Cab for Cutie, Craig Finn from The Hold Steady, and Ira Kaplan of Yo Lo Tengo.

Lyrically, a couple of songs are on the campy side. "Don't Call Them Twinkies" is about The Minnesota Twins and "Panda and The Freak" celebrates baseball's obsession with nicknames. The title references Pablo Sandoval and Tim Lincecum of the San Francisco Giants. Those tracks are offset by more serious fare. Several songs are about players who fell on hard times. "1976" is the sad story of the late Mark "The Bird" Fidrych who had one sensational rookie season. The following year injuries ruined his career and in 2009 he died in a freak accident. "Tony (Boston's Chosen Son)" is about the late Tony Conigliaro, another ill-fated star whose career was derailed by a bean ball that severely diminished his eyesight. He died young too, the victim of a heart attack. "Here Lies Carl Mays" is a tale about the pitcher who killed hitter Ben Chapman with a pitch to the head in 1920 before batting helmets were required. Regrettably, Mays showed very little remorse and he was reviled throughout the major leagues for the rest of his life.

There have been some very successful rock concept albums released over the years but very few concept bands who have left a positive lasting impression. The latter tend to be novelty acts with short life spans, and despite the the quality stuff on Volume 2, I believe The Baseball Project is no different. However, the band members all have substantial talent and Buck is a future hall of fame member. If they choose to remain together as a unit they can continue to be successful because all involved have displayed their ability to expand their horizons beyond their current narrow song cycle.
Baseball Rock 'n Roll