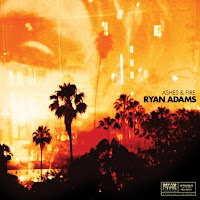 Ryan Adams has often been too prolific for his own good. Unable to edit himself, he released too much music over the last decade and often railed against his record company when they tried to reign him in. Since a successful, well publicized stint in rehab about four years ago cleaned up his lifestyle the country-rocker has mellowed, married Mandy Moore, a singer and actress with a squeaky clean image, and he's been more careful about the music his public gets to hear. All of this has led to the critically acclaimed Ashes & Fire, Adams' first new CD since breaking up his really nice backup band, The Cardinals.

Ashes & Fire is an album in which the lyrical content is far more important than the music so it makes sense that it's also one of the quietest efforts in Adams' catalog. Even so, the all-star veteran really knows how to construct a song and the seriously catchy "Lucky Now" deserves the substantial radio time it has won on stations interested in cultivating adult alternative audiences. The tune's lyrics show a maturity won through hard times. Adams sings, "I don't remember, were we wild and young? / All that faded into memory / I feel like somebody I don’t know / Are we really who we used to be? /Am I really who I was?" Throughout the disc his lyrics are reflective but not depressing.

Even though the CD emphasizes his songwriting Adams still solicited help from some of rock 'n roll's more extraordinary sidemen: Benmont Tench on keyboards and Greg Leisz on steel guitar. He got vocal assistance from Chris Stills, Norah Jones, and his wife. Glyn Johns produced and mixed the album. It also helps that Adams' voice is quite soothing so it all adds up to a disc that sounds as nice as it is intelligent.

The alt-country bad boy proves once again that when he's properly motivated he'll create a worthy set of music.