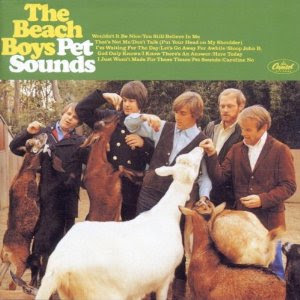 The Beach Boys' Pet Sounds,simply stated, is one of the most gorgeous pop-rock records ever to be released. Unfortunately, it took decades for the album to achieve gold record status and there are still a multitude of casual Beach Boys fans who are not familiar with it beyond the three huge hit singles it contained: "Wouldn't It Be Nice," its b-side, "God Only Knows," and "Sloop John B." A fourth single, "Caroline No," was issued in Brian Wilson's name only and it also did well on the charts. Never was his songwriting more mature, never were the arrangements more intricate, celebratory or sad, and rarely were the vocals of the five original bandmates plus Bruce Johnston more beautiful.

The album is notorious for not having any of the Beach Boys playing a single note on it. However, the sextet contributed all of the vocals. It's still their artistic vision, not the company's or any outsider's, because Wilson was in total control of everything that occurred in the studio. He not only wrote, arranged the instrumental and vocal tracks, and produced the album, he chose all of the musicians who played on it, and he sang many of the lead vocals too. The one thing he didn't do was write the lyrics and that was only because with all of his other responsibilities he believed he just wouldn't have the time to do them justice. So, Wilson hired an acquaintance, Tony Asher, for that chore, and he wrote lyrics around very firm ideas and instructions given to him by the group's resident genius. Together they produced songs that were emotional, heartfelt, and poetic.

The album contained all kinds of instruments and sounds that were unusual to pop music. Bass harmonica, kazoo, sleigh bells, oboes, vibes, violins, barking dogs, and locomotive sound effects were all part of the mix on a record that was considered by many to be a serious work of art and not just silly music for teenagers to dance to on a Saturday night.

Highlights include Carl Wilson's outstanding lead vocal with brother Brian and Johnston joining him on the group ending to "God Only Knows," the intricate arrangement of all six voices on "I'm Waiting for the Day," the acapella vocal break on "Sloop John B," and the forlorn and moving confessional "I Just Wasn't Made for These Times."

It's a shame that Capitol Records hated the disc and didn't put their full promotional machine behind it and, even worse, when Brian played the tapes for the always lovable Mike Love, he told Wilson he was "screwing up." Despite those violent reactions Pet Sounds deservedly goes down as one of the great pop records in history. It remains hugely influential (Paul McCartney said it inspired him to create Sgt. Pepper's) and is loved by virtually anyone who is familiar with it.