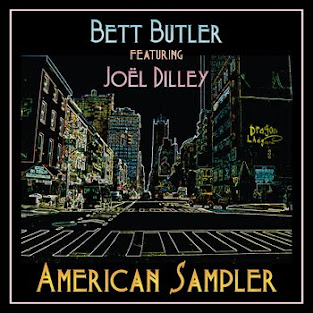 Not recording an album of standards once an artist is eligible to join AARP (American Association of Retired People for you non-patriots) must be a violation of international law. Paul McCartney's recent, semi-successful attempt and Rod Stewart's four unspeakable atrocities are just two examples that prove the rule, so it's really a good thing when someone who was born to sing these songs actually croons into a microphone. Such is the case with San Antonio’s Bett Butler, a jazz singer and pianist who just released her third CD.

Butler plays piano and handles all of the vocals. Her husband, Joel Dilley, is a successful jazz bassist and band leader with his own recording career but here he functions as Butler's only sideman. Their very sparsely arranged sessions give the listener an idea of what a barren Christmas tree looks like in the woods without all of the artificial adornments. You can appreciate the tree just for being what it is and this album allows you to appreciate both the song and the singer just the way they are. There is no clutter, no mess.

Songs include "My Melancholy Baby," "I've Got Rhythm," "Ev'ry Time We Say Goodbye," "Say It Isn’t So," "Over the Rainbow," "Brother, Can You Spare a Dime," and five more.

Butler has released three very different CDs over the course of a decade. Each one has demonstrated her eclectic taste and versatility and, just like its predecessor, American Sampler was released with another very attractive album cover.
Bett Butler Jazz Vocals