An Appreciation of James Taylor 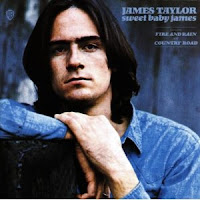 It's unusual to do a tribute to someone while he's still alive but James Taylor is a man who deserves all of the accolades he receives because, while he didn't invent the sub-genre, he is the person most associated with kick starting the entire singer-songwriter movement into the popular mainstream.

Details about Taylor's young adulthood, his hospitalization, his serious heroin addiction, and his upper middle class upbringing have all been well documented so we're not here to discuss those titillating parts of his life. It's only his music that matters, although as his folk-rock masterpiece, "Fire and Rain," from his first hit album, Sweet Baby James, proves it's not always possible to separate the two.

What is it about Taylor's music that gave him such widespread appeal even with people who were into the hardest rock and roll?

The soon-to-be star came along in 1970, when rock was at one of its most creative and loudest eras, and to those people who craved something more comfortable, less flamboyant, and more thoughtful, Taylor was the perfect antidote. Part of the reason is the Massachusetts native's soothing and reassuring vocals. His contemporary female counterpart, Carole King, did not possess that easy flow in her singing and that's one of the reasons why he became the bigger star of the two.

Taylor's songs range from very moving and introspective like the career making hit mentioned above, to the humorous ("Traffic Jam" and "Mona"), and he can even rock out on occasion ("Honey, Don't Leave L. A."). His songs appealed to women because he showed a sensitive side that Led Zeppelin, The Rolling Stones, and The Who never revealed.

Men liked Taylor too. His ability to appeal to everyone came naturally. He never had to force the issue and that was another factor contributing to his huge popularity.

Ironically, for a composer who has been so influential for more than a generation he has had a surprisingly large number of hit singles with new versions of other people's songs beginning with King's "You've Got a Friend." Other covers included "Handy Man," "How Sweet It Is," "Mockingbird" with Carly Simon, his wife at the time, and "Up on the Roof." All of these releases prove he respected other people's work. Too many singer-songwriters wouldn't think about issuing tunes by their peers as singles, especially one as highly regarded as Taylor.

In concert, Taylor is a fine performer. First impressions during his rare interviews may lead fans to believe that the folk-rocker is quite shy. To the contrary, he's often funny and personable with the audience whether it's in an intimate setting such as performing with King at the Troubadour or in a large arena.

Taylor has to go down in history as one of pop music's more important figures. Every guitar strumming singer-songwriter appearing at coffee houses today, as well as those who went on to greater successes, owe him their eternal gratitude.