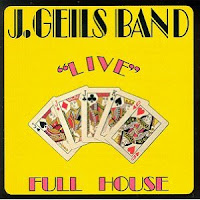 Simply put, The J. Geils Band's Full House is one of the finest concert albums in rock history and that's because street-wise bar bands like these guys are always more comfortable on stage where they can play with wild abandon than they are in the confines of the studio. While the group always made good records they paled in comparison to this 1972 five-star classic recorded at Detroit's Cinderella Ballroom.

This outstanding party outfit had three great assets, including the bandleader's guitar, but the two biggest stars were lead singer Peter Wolf, who could strut his stuff as well as Mick Jagger did, and harmonica player Magic Dick (Richard Salwitz), whose instrument was often featured in the lead role on many of this Boston sextet's most memorable songs. His most notable contributions to this set are on the frantic instrumental "Whammer Jammer" and "Lookin' for a Love" the group's best known tunes from the early years. Salwitz just might be the most exciting harp player in rock history.

While keyboard man Seth Justman wrote some hits for the band ("Give it to Me" and "Must of Got Lost") they always excelled at covering great R&B and blues songs and this eight track platter is loaded with them. The guys roar through Otis Rush's "Homework," The Contour's "First I Look at the Purse," and John Lee Hooker's slow but scorching blues, "Serves You Right to Suffer." The only original is the Geils/Wolf collaboration, "Hard Drivin' Man" and it too is a barn burner.

In recent years Wolf has become an outstanding solo act who has made some terrific music and Geils has recorded two CDs of high quality vintage jazz but a long time ago they were both members of a band that should go down in history as America's answer to The Rolling Stones.