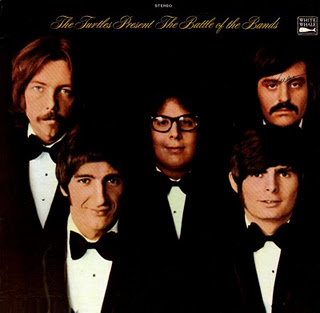 The Turtles are another one of those great bands from the 1960s that almost nobody except the baby boomers who came of age during the Lyndon Johnson Administration will remember. The quintet had a nice run during the second half of the decade as they landed many folk influenced soft-rock hits on Top 40 radio. Despite the political turbulence of the era their music was typical of the sunny, Southern California sound popular at the time, offering tight, pleasing harmonies and upbeat, melodic arrangements.

Formed by Howard Kaylan and Mark Volman in Los Angeles The Turtles began their career with a fine cover version of a Bob Dylan song, "It Ain’t Me, Babe" that became a top ten hit in 1965 and their popularity grew from there.

In short order they had two more hits, "Let Me Be" and "You Baby" and then in 1967 The Turtles became huge with the tune that really made them famous. "Happy Together," their only #1 record, was among the more popular songs of the decade and if young people today know the band at all it will be through this monster chart-buster. Their follow-up to that smash hit was the exuberant "She'd Rather Be With Me" which went to #3. The group's next couple of years continued to be fruitful. They had successes with "You Know What I Mean," "She's My Girl," "Elenore," "You Showed Me," "Can I Get To Know You Better," and more.

The team of Kaylan and Volman really were The Turtles. They led a band with a constantly changing supporting cast that at one time included Chip Douglas who later went on to produce The Monkees. After The Turtles disbanded the duo, believe it or not, did a complete musical metamorphosis by joining Frank Zappa in The Mothers of Invention followed by a separate career where they were known for a long time as Flo & Eddie. At various times they also sung with Bruce Springsteen, T. Rex, and Alice Cooper.

In the '90s there was a Turtles reunion and Kaylan and Volman are still active in the new century as you can see on The Turtles official website.